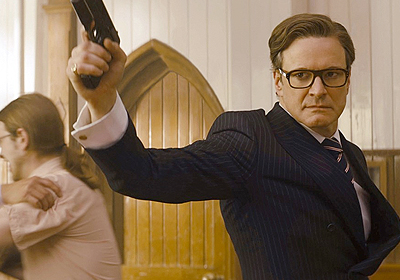 "An absolute pleasure to watch, Kingsman: The Secret Service grabs your attention from an opening sequence that’s set in the past"

An absolute pleasure to watch, Kingsman: The Secret Service grabs your attention from an opening sequence that’s set in the past. We then jump forward to meet Gary ‘Eggsy’ Unwin (Taron Egerton); a wayward young man who, having grown up on a rough South London housing estate with an abusive step father, ignores his potential and looks set to follow the wrong crowd towards a lifetime in and out of jail.

Luckily for him he’s sprung from prison after a stunt involving a car by dapper gentleman spy Harry Hart (Colin Firth), codename Galahad, who owed a debt to his birth father. Harry offers him the chance to change his life around and recruits him to be trained and tested for the chance to become the new Lancelot and join their secret service.

The organisation’s head quarters, Kingsman tailors on London’s Savile Row, is presided over by Arthur (Michael Caine) and the whole set up nods towards the agents being the modern day gentleman knights. Meanwhile the popular, yet villainous celeb, Richmond Valentine (Samuel L. Jackson), and his lethal assistant Gazelle (Sofia Boutella), who has blades for legs, set in motion a horrific and diabolical plan to solve the worldwide problem of climate change.

This film is not only one to see, but one to reserve a spot for on your shelf. Its hat-tip to the James Bond era of spies is edgy and quick witted, bringing back the fun to action films. Packed with gadgets and tension, there is no time wasted as the story digs its hooks in and pulls you along for a thrilling, exhilarating ride that couldn’t be more British if it tried.

Colin Firth gives a stunning performance and fits in this role like it was made for him. He is everything you want a gentleman spy to be and more, he’s mild-mannered and moral, yet absolutely lethal. Eggsy couldn’t be more different from Galahad if he tried and yet somehow this chalk and cheese mix works so well. The two form a bond that is sheer on-screen brilliance and will have you laughing with and rooting for them all the way. Newcomer Egerton proves that he is here to stay, with a character transformation that sees him go from a reckless, good-for-nothing kid to a suited and brogued spy who would look as comfortable ordering a martini as he would saving the world.

It’s all genuinely fantastic, as is Jackson’s role of an untypical bad guy who cannot stand the sight of blood, even though he intends to kill huge numbers of people. The fight sequences are just perfect as well, with slick choreography that looks stunning; while the way in which it is shot oozes a stylish sophistication, not to mention a brutal elegance. One particular scene (in a church) will leave you wide mouthed and probably has the best use of Lynyrd Skynyrd’s Free Bird you will ever experience! Director Matthew Vaughn has not only hit the nail on the head, but he has hung a sign from it saying ‘Follow This...’