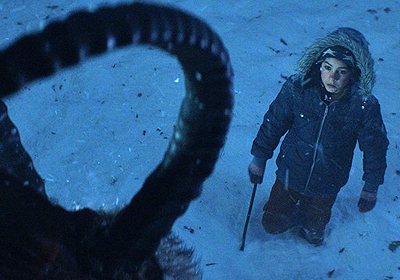 "It’s inventive, hilarious and definitely scary enough to make you fearful of every beautifully wrapped present that’s coming your way this year"

Christmas-themed horror movies aren’t uncommon in recent years, and have been making the occasional appearance to varying effect. Krampus, directed by Trick ‘r’ Treat’s Michael Dougherty, is one of the more excellent examples, backing up the horror with some perfectly pitched black comedy. It’s inventive, hilarious and definitely scary enough to make you fearful of every beautifully wrapped present that’s coming your way this year.

Krampus begins with a classic Christmas cliche - the dysfunctional family together to share turkey and a fair amount of bickering. Uniting some spiteful young cousins, an aunty equipped with gin and a quiet German grandmother with her own secrets, this gathering is overseen by weary couple Tom (Adam Scott) and Sarah (Toni Collette). The only one left with a drop of Christmas spirit is their son Max (Chef’s Emjay Anthony), whose ensuing breakdown triggers the appearance of Santa’s malicious helper - the horned goat-creature known as Krampus, there to punish those who have forgotten the meaning of the holiday.

The film begins with one of the best opening sequences of the year, hilariously lampooning the commercialisation of modern-day Christmastime. It’s brutal, yes, but it’s undoubtedly right on target, bearing down on unadulterated first world greed.

As it goes on, the initial family scenes feature some excellent one-liners, but it’s where things start to get creepy that the film really starts to surprise. The movie is best viewed with as little pre-knowledge as possible, and fortunately the advertising for Krampus has been safely vague. Much of the power in this horror is in the imaginative little details, of how Dougherty has created fear from the most unlikely of places. You’ll be shocked and yet you’ll laugh at what you can suddenly see as terrifying.

And it is terrifying. Despite always being undercut with a knowing humour, the use of real props over extensive CGI has led to some realistic creepy effects. Notably as well, Krampus is not gory, cutting away from potentially vivid moments and leaving it to the audiences imagination, which can often handle horror in a far more effective way than film can. The film is full of movie references too: from Jaws to Signs to Home Alone, it’s well aware of the predecessors that inform both the horror and festive genres.

Ultimately with this film, you get the impression that the director has had a great amount of creative control not always afforded by big studio films. A good example of that is the stunning animated scene that occurs around halfway through, something that may have been viewed as a gamble by big financiers but here adds a great little inventive detail. The twist ending is also great, managing to buck a common horror trend by actually rounding off an irresolvable situation in a satisfactory (and witty) way.

The only issue with Krampus might be it’s re-watch value, an essential test of the Christmas film. With its best feature being the power to surprise, the movie might not have much to add on a second screening and therefore probably won’t stand up alongside classic features that make their annual television appearances.

However, I went to see Krampus with little expectations and ended up having some of the most enjoyable 90 minutes I’ve had in a cinema this year. I may also have a slight fear of it not being Christmassy enough, and will be promptly googling mince pie recipes to avoid Krampus’ wrath. Nevertheless, this film is totally worth seeing for both those festively cynical and otherwise.