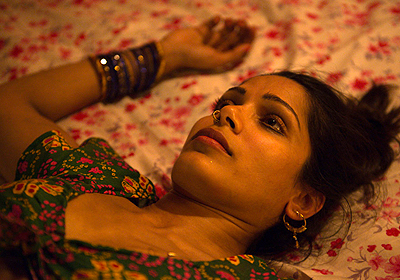 "This global movie brings the unease of sex trafficking back home, to the extent that we feel queasy, and ill at ease"

Only one percent of people in India escape the flesh trade, and Love Sonia revolves around one person who makes up part of that one percent; Sonia played by Mrunal Thankur, who gives a beautiful, heart rendering performance.

It took director Tabrez Noorani a decade to make Love Sonia, during which time, he lead two lives; by day he was a Line Producer, and by night he conducted raids, which he carried out undercover, alongside Non-Governmental Organisations (NGOs). People were convinced that he was just scouting locations, when, in actual fact, he was establishing the location where trafficked women and underage children were being held against their will.

The most provoking parts in the film seem to occur in the poor village, and the red light district of Mumbai. It's here that we really feel the director's sincerest storytelling skills come to life, despite Noorani saying, “In the face of such huge, global problems, cinema seems like a weak tool, but it can play its part in changing attitudes and raising awareness."

Sonia’s poverty-stricken father (Adil Hussain) is compelled to sell off his daughter, Preeti (Riya Sisodia) to a local loan shark Dada Thakur (Anupam Kher), in the hope that he will find employment for her in Mumbai.

In a desperate attempt to track her sister down, Sonia offers herself over to the same loan shark but winds up in a brothel run by Babu (Manoj Bajpayee) situated in the red-light district of Grant Road.

The authenticity of the story is explained when I hear that Noorani requested his actors talk to sex workers and NGOs in India. He also hired in two women, who'd been trafficked formerly, and they acted as consultants on set.

When threatening pimp, Bajpayee offers Sonia to a client for the price of a cigarette, not only does he highlight his desensitised nature but also, the lack of worth he sees in her as a human being. To him, she is no better than a loin of pork!

The film proves a challenge to watch at times as Sonia's steep descent into the “narak” (the sex trade) unravels before our very eyes.

Sonia is struck, raped, then illegally transported to the other side of the world, Los Angeles.

I felt this a bit of an overstretch, and what had been a solid film up to this point required somewhat of a re-sew. However, I do appreciate that it was to highlight the problem of the sex trade on a global scale, and not solely focus on India.

No character is assigned a 'happily ever after' story thread, remaining 'true to life.' A woman's dependency can mean she returns to sex work, and more often than not it relates to their families having abandoned them, too ashamed to take them back in.

This global movie brings the unease of sex trafficking back home, to the extent that we feel queasy, and ill at ease. I'm not sure I have been hit with the same impact since the release of two-part British-Canadian television thriller, 'Sex Traffic' in 2004.