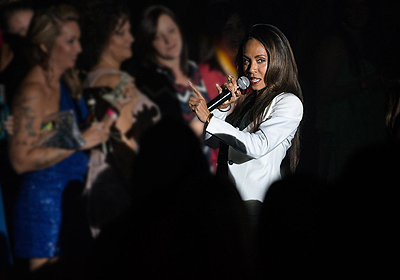 In 2012 Magic Mike became one of the surprise hits of the summer with not only female audiences but male audiences as well. Fast forward three years and we bare witness to a second slice of beefcake as Channing Tatum, Matt Bomer, Joe Manganiello, Kevin Nash, Adam Rodriguez and Gabriel Iglesias reunite for one last time, sadly without Matthew McConaughey and Alex Pettyfer.

Picking up the story three years after Mike (Tatum) bowed out of the stripper life at the top of his game, Magic Mike XXL finds the remaining Kings of Tampa - Ken (Bomer), Big Dick Richie (Manganiello), Tarzan (Nash) and Tito (Rodriguez) - ready to throw in the towel. But they want to do it their own way by burning down the house one last time at a stripper convention in South Carolina, and with legendary headliner Magic Mike sharing the spotlight with them.

It’s funny how music can change a film. Once we’ve reacquainted with the characters, Mike is in his workshop when Ginuwine’s super catchy 1996 R&B hit ‘Pony’ comes on the radio. With a knowing smile he gives the audience what they want, starting with him grinding his hips to the beat, before he jumps around the room with annoyingly good moves, showing off Tatum’s skills as a dancer.

There’s a feeling of ‘welcome back’, but also the males in the audience, who might be watching it with their partners for the first time, will like this film as well.

You can see the cast’s chemistry throughout the movie, and it makes you relax and enjoy being in their company. Adding Jada Pickett-Smith as Rome is a nice touch. She has to show the guys they need to make their performances revolve around making the women happy, bringing joy and giving them what they want. Essentially giving the women power, as Rome prefers to refer to her audience as ‘goddesses’.

As you can guess, the dancing is amazing from Tatum and newbie Stephen ‘tWitch’ Boss, both having graduated from the Step Up franchise. Also, Manganiello gets a chance to shine in one of the XXL’s funniest moments.

On the boys’ tour they stop off at a house owned by Andie McDowell, Queen of the Southern Belles social group, with the sequence ending brilliantly with her dubbed “The Glass Slipper” which I have a feeling McDowell will be nicknamed from now on.

The one character flaw would be Amber Heard as she offered nothing to the film and can be easily forgotten., whilst Elizabeth Banks is only in the film for a few scenes, but she’s more memorable.

The director Gregory Jacobs does a good job of moving the story forward and even though there’s no reintroduction to the characters, you get to know them pretty quickly.

Finally, guys should go and see this film and even go in a group - there’s nothing to feel awkward about; you’ll fully enjoy yourself and laugh but it also teaches us all how to treat women respectfully.

Verdict - A fully entertaining film with likeable characters where the men will like it just as much as the women.