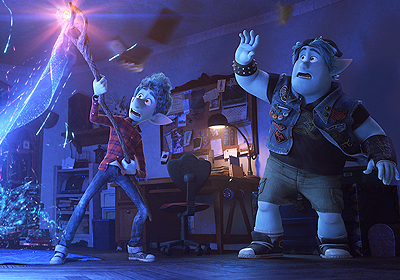 "the World they have created is beautiful and well realised, the story; that is essentilly a road trip story of discovery and self discovery is heart warming and exciting to watch"

The latest animated offering from Pixar is the magically wonderful adventure Onward, from the beautiful mind of Dan Scanlon is Onward and straight from the start you can tell that it is going to be something special.

So we are introduced to a fantastical fantasy world full of magical creatures that have been domesticated after finding an easier way of getting by without magic and we meet Ian and Barley Lightfoot (Tom Holland and Chris Pratt respectively), two brothers living with their mum Julia Louis-Dreyfus) and their adorably excitable pet Dragon.

When Ian turns sixteen, his mum gives him and Barley a present that their father left for them when they are over, but this isn’t just any present, they are gifted with a magic staff with a spell and a Phoenix Gem that will allow them to bring back their father for one day, when they cast the spell, it is too powerful and they bring back half of their father, and the Phoenix Gem is destroyed.

Knowing they only have a limited time to see their father one last time, the brothers embark on an epic quest to acquire a Phoenix Gem to complete the spell.

In true Pixar fashion, the World they have created is beautiful and well realised, the story; that is essentilly a road trip story of discovery and self discovery is heart warming and exciting to watch.

The voice cast, lead by Tom Holland and Chris Pratt is just electric, these two wor incredibly well together, I'd like to see or hear them together moe, it's going to be a good time; whether that's more Avengers films or more in this World or whatever they are pair for in the future, I'm looking forward to it.

The other stand out for me is the Manticore; voiced by the incredible Octavia Spencer, there's definite scope there to see what else she got up to before meeting the young Lightfoots, maybe with Disney+ this can be explored.

Julia Louis-Dreyfusis always a win, and thankfully in Onward, she isn't reduced to the stay at home mum, hoping her boys are safe, she gets in o the action, since she discovers things as well.

All in all, Onward is a beautifully anmated story which is full of eart that will tug at your heart strings, and will give the Pixar theorists a run for their money.