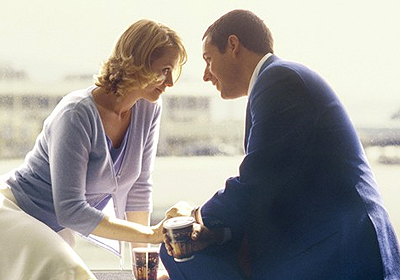 "stark reminder that the film is very funny and that Sandler is funny in it, as well as providing real depth to a complex romantic lead"

It was reported that when Adam Sandler read an early review of Punch-Drunk Love, he threw his arms in the air and yelled ‘They finally like me!’ before paying for everyone’s meals in the restaurant in which he was eating. After a string of poorly received but commercially successful comedies, Sandler found an unlikely ally in the form of Boogie Nights and Magnolia writer /director P.T. Anderson. Despite the aforementioned two films (plus his debut Hard Eight) being richly layered, sombre character studies, Anderson was reportedly a fan of Sandler and so wrote Punch-Drunk Love specifically for him.

It’s often remembered as Sandler’s first ‘serious’ role but watching the film ahead of its Blu-ray release on 21st November, it’s a stark reminder that the film is very funny and that Sandler is funny in it, as well as providing real depth to a complex romantic lead.

Sandler still plays something of a man-child, and the anger with which he made his box-office mark is still present but Anderson managed to tap into these trademarks to create something that lead to a golden globe nomination for his star but sadly, a film which lost out at the box-office.

Sandler plays Barry Egan, a novelty toilet plunger salesman with a volatile rage and who sometimes cries for no reason. Over the course of the film he gets embroiled in a labyrinth plot involving a phone-sex scam by a mattress salesman (Philip Seymour Hoffman), a random harmonium, falling in love with his sisters friend Lena (Emma Watson) and purchasing an awful lot of healthy pudding o get free air-miles (a sub-plot interestingly inspired by a true story). As with all Anderson films, there is a lot going on but he is a filmmaker of such skill and craft that the all the plot elements and characters are deftly handled, keeping the audience constantly in tune.

The real secret to the film though is that the comedy feels so effortless while the romance somewhat creeps up on you. And at the heart of it all is Sandler’s performance, managing to make an awkward social outcast both amusing and likeable (our sympathies are aided by the fact that he is put upon by his even sisters before being blackmailed). In the straight role, Emily Watson brings the required warmth and subtlety while Seymour Hoffman is brilliantly counter-cast as a thuggish business criminal.

It all makes for a wonderful piece of romantic cinema that transcends expectations and was a career high for its star. Sandler has gone on to play serious roles in the post 9/11 drama Reign Over Me, Judd Apatow’s Funny People and Jason Reitman’s Men, Women and Children but he never scaled these heights, neither dramatically or comically, before or since. Anderson meanwhile followed this up with the peerless There Will Be Blood, following up on his desire to work with both Sandler and then Daniel Day-Lewis.

Anderson and Sandler were always an odd match on paper and the way their careers intersected raised eyebrows at the time and, given the largely very different films both have made since, seems odd in retrospect. But it was a success for both of them as well as everyone else involved and Punch-Drunk Love deserves to transcend its disappointing box-off performance to be viewed as a genuine, funny and original romantic comedy.