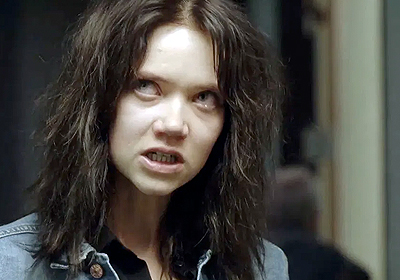 If you are a fan of superheroes then it's safe to say that we are living in a golden age with all the amazing superhero movies that have come out over the past decade about people with extraordinary abilities. But not all people with such powers are heroes. Sometimes they can be victims. Which brings us to the tragic case of one Tess Stern in REBORN.

Tess Stern (Kayleigh Gilbert) died at birth but during a freak accident, she was hit by electricity during an electrical storm and brought back to life with the ability to manipulate electricity through telekinesis. She is raised (poorly) by the doctor who found her that night and his abuse towards Tess backfires when Tess breaks free of his shackles.

Tess then goes in search of her mother Lena O'Neill (Barbara Crampton); a strugling actress who needs to find closure about her presummed dead daughter who is very much alive. But Tess is confronted with many bumps along the way that forces her to use her abilities in the worst possible ways. Detective Marc Fox (Michael Parè) is on the case attempting to stop Tess and save Lena from what may be a deadly family reunion.

I've always been quite keen on any origin story about someone with super powers; the good guy ones are pretty basic and straight forward but the bad guy ones are more interesting as they have more depth and you see the influences and events that drive them into becoming dark.

JOKER being a recent example and REBORN has an almost similar theme. It's about abandonment and what can happen when young people are treated poorly and lead to believe that the World is indecent. Barbera Crampton and Kayleigh Gilbert give stand out performances as two people trying to find one another and going to great lengths to do so.

There is a dark tone throughout Tess's scenes that reflects her dark and troubled personality inside which stood out to me. Director Julian Richard's made a special effort to make this a movie about a mother and daughter finding one another and he certainly succeeds in doing so.

Reborn is a tragic but important movie about finding closure and remind us that sometimes there is no future in looking in to the past.