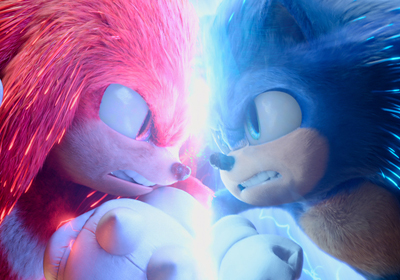 "a triumph from start to finish, building on the promise of its predecessor, whilst at the same time showing that the future of Sonic on the big screen is bright!"

Picking up after the events of Sonic The Hedgehog, Sonic The Hedgehog 2 opens with Dr. Ivo Robotnik (Jim Carrey) still stranded on the Mushroom Planet where he engineers a beacon that attracts the attention of a couple of masked warriors and the familiar face of Knuckles (Idris Elba).

Knuckles forms an alliance with Dr. Ivo Robotnik, due to the fact that they both want to take vengeance on our blue hero Sonic (Ben Schwartz), Sonic was responsible for Dr. Ivo Robotnik’s exile and Knuckles has an axe to grind due to the history his Echidna tribe have with Longclaw (Donna Jay Fulks) and the Owls.

What follows is a fun filled, globe trotting adventure with Sonic and Tails on a mission to find the fabled Master Emerald before it can be used to destroy life as we know it.

As a Sonic fan, I like the fact that the creative team are cherry picking from the existing Sonic The Hedgehog lore and creating their own, Longclaw and the Owls don’t exist in the main continuity of the games (she’s made a couple of appearances in mobile games), but they are a welcomed addition to the Sonic lore, connected to the history of the Master Emerald. Jeff Fowler and his creative team have said that they won’t follow the games continuity, which in my opinion is the best way to do it, I, like so many others don’t want to watch what I have already played, so adapting what they want to use is the best course, and it shows with two wonderfully entertaining films.

As with the first film, Sonic The Hedgehog 2 is beautifully realised, the character designs of Sonic, Tails (Colleen O'Shaughnessey) and Knuckles are just like they have stepped out of the games, Dr. Robotnik’s look is closer to the games too with his iconic moustache, he’s still a madcap genius and Carrey is incredibly comfortable in the role. Schwartz is a fantastic Sonic, he brings a childlike innocents and vulnerability to the role, making the blue hero his own, there have been a few voices for Sonic, but Schwartz is the Sonic we need on the big screen.

O'Shaughnessey reprises her role of Tails from the games, and whilst it is different, Tails’ relationship with Sonic is at a different point in the films, so her handling the film version differently, makes complete sense and Elba as Knuckles is awesome, the perfect fit for Knuckles.

The returning supporting cast of James Marsden as Tom, the ‘Donut Lord’, Tika Sumpter as Maddie, Natasha Rothwell as Rachel, Adam Pally as Wade and Lee Majdoub as Agent Stone all shine in their roles, in many cases they have more to do, but the focus is on the adventure that Sonic and Tails are on.

With many references to the games, Sonic The Hedgehog 2 is a triumph from start to finish, building on the promise of its predecessor, whilst at the same time showing that the future of Sonic The Hedgehog on the big screen with the reported Sonic Cinematic Universe is truly bright. And remember to stay for the end credits scene, you’ll thank me later.