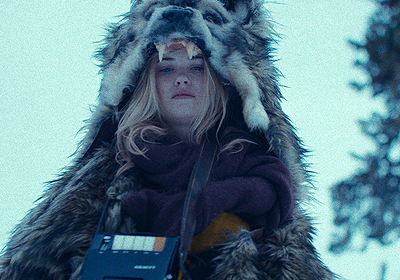 "the film is held together by a stunning, almost entirely solo, performance from Virginia Gardner"

Grief is a powerful emotion that all of us at one time or another in our lives will have to endure. Many films have attempted to depict the often painful and lonely experience that grief can put us through, often firmly rooting themselves in stark gritty reality when telling such a story. However, the film that is the focus of today’s review, Starfish, while retreading familiar themes, does so in a manner that is innovative, creative, strange but also rather beautiful.

After the death of her friend, Aubrey’s grief-stricken isolation is interrupted by a potentially apocalyptic event, an event in which her late friend’s cassette tapes hold the key to solving.

As hinted in the intro, Starfish is very much a film focusing on the grieving process. The film opens with our lead character Aubrey struggling to come to terms with the death of her best friend Grace, the film adopts a very quiet low key approach with subtle cinematography that compliments Virginia Gardner understated performance as Aubrey.

With much of the opening dedicated to Aubrey mourning her friends passing alone, one might think that this is essentially what the rest of the film is going to be. However, you’d be very wrong. Once we have settled into this mindset, the film takes a very big genre turn, changing from a small character-focused drama into an almost Lovecraftian sci-fi horror as Aubrey is confronted with an invasion of monstrous creatures.

It’s a sudden genre shift that would make many other films stumble, with their genre shifts perhaps feeling out of place or forced. Yet, in Starfish, it somehow manages to feel subtle and low key enough to feel natural and in keeping with the film's overall themes. For large parts of the film, the presence of a potential apocalypse serves mainly as background noise to Aubrey’s grief, with her initially deciding against attempting to solve this problem and opting instead to isolate herself from what’s left of the world, before reluctantly embarking upon a scavenger hunt to hopefully save the world.

On a technical level, Starfish is immaculately constructed, with beautiful subtle cinematography that perfectly blends with the eerie snow encrusted empty town in which the film is set. The film also boasts some truly creative sequences such as a standout animated music video-esque scene in which Aubrey is pursued through the town, coming across all manner of surreal sights.

The film is also littered with more than a few moments that will leave you scratching your head to what they mean, such as one very perplexing possible dream sequence in which the film becomes very meta-textual as Aubrey seems to inadvertently escape the confines of the film’s reality.

The film’s overall plot is also rather mystifying as the cause of the sudden appearance of these creatures is only hinted at throughout, with no real explanation offered, with the ending, in particular, leaving many questions unanswered, suggesting that things have not gone the way they are supposed to, but also that they have gone exactly as planned. However, I feel that this ambiguous approach is exactly what the filmmakers were aiming for, and it does lend the film a kind of mysterious quality that keeps you guessing and crucially, keeps you watching.

Despite the often confusing plot, the film is held together by a stunning, almost entirely solo, performance from Virginia Gardner as Aubrey, with the actor managing to capture the deep pain and loneliness of the grieving process in a way that is both beautiful and rather moving. One moment in which she tearfully speaks to a vision of her deceased friend is particularly poignant and powerful as she finally allows her grief to wash over her.

Starfish is a film that I think is going to be treated like Marmite by viewers. Some are going to love it for its rather creative and ambitious take on the familiar story of grief, while others might consider it a pretentious snoozefest full of ideas but with nothing interesting to say about them. Despite a slow pace and a sometimes confusing narrative, the creativity and ambition of the film, coupled with its beautiful visuals, score and lead performance of Gardner make the film, in the end, well worth a watch. This is one you’ll just have to check out and decide for yourself.