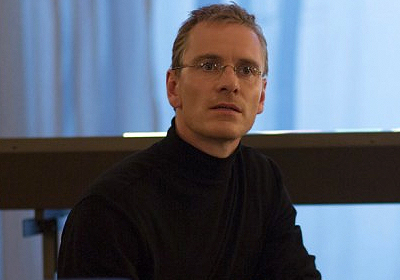 "will shed some light on the man that might have been ahead of his time, but won’t explain all the mysteries. It is the sort of film that will charm and move you, but also entertain you"

The Steve Jobs biopic is written by Aaron Sorkin and directed by Danny Boyle. The visionary Steve Jobs is played by Michael Fassbander whom, at least for me, is exceptionally surprising, in a good way, in said role.

The film takes us back in time from its first minute, by starting with a black and white clip and it’s split, very similar to a play, into three acts: the opening section taking place in 1984, the moment when Jobs and Apple part ways, then moving into 1988 and finally during launch of the iMac in 1998. Each part plays a key role in the development of the story behind the man or the man behind the story. As time passes, each interaction provides us with some insight of who he might be behind shut doors. Even so, we are sadly left with the mystery, probably no one managed to know to this point who exactly was the man beneath the turtle neck.

As facts go, even from the beginning we are introduced to most of the characters. The action is taking place at one of their launches, everyone is there and everyone is in charge of making that event the best possible one. However, they face a small technical problem, as the computer refuses to say “Hello”. Steve holds Andy Hertzfeld (Michael Stuhlbarg) responsible: “You had three weeks. The universe was made in a third of that time!” Andy, however, doesn’t run away from serving back a sarcastic response: “Well, sometime you will have to tell us how you did it.”

Managing so to underline that god-like side Jobs might have had. From those first scenes we also get to witness the special relationship Jobs and Joanna Hoffman (Kate Winslet), his long-time Marketing and PR adviser, have. She probably was his only true real support in everything and one of the very few people he fully trusted.

During the same event, Jobs has to also deal with a personal crisis: his ex-girlfriend Chrisann Brennan (Katherine Waterston) shows up, together with their five year old daughter, to ask for more money as the provided financial support is too low. This presents the audience with a very cold Jobs, 98% doubtful about him being the father of said child, a Steve Jobs who is very hard to move. The miracle however is performed by Lisa, without even knowing, by drawing something in paint for her father. That first drawing, saved on Steve’s computer, is the first brick that helps him build a relationship with her. A relationship which, despite all the ups and downs, he actually cares about. The relationship for which he breaks one of his most powerful obsessions, and that, when it comes to this man, says a lot.

Back to the actual action, things keep on piling up as Woz (Seth Rogen), Steve’s former partner and co-founder of the Apple brand keeps on pushing for public acknowledgement in regards to his creation of the Apple II. “I’m tired of being Ringo when I know I’m John,” Woz whines. To which Jobs replies casually and without thinking how that might affect his friend: “Everyone loves Ringo!” Needless to say that Jobs doesn’t give in under any of his pressures, even if, as we later find out, he does have quite a soft spot for Wozniak.

The launch isn’t at all successful and when the board of directors are put in front of taking a decision, they let Jobs go. However, he does fall back on his feet in a very strange way. Four years later we get to witness another launch, but one that is actually more of a masquerade done in order to allow time to pass. He believes so much in his idea and the fact that people will eventually realise he is right that he is willing to do whatever it takes. In this second act we get to experience one of the most powerful dialogues between Steve Jobs and John Sculley (Jeff Daniels). A long-awaited discussion beautifully filmed and choreographed.

The second act is also the one to show us how much he actually values his team. Everyone is still around him, with Joanna in the lead. It is emphasised how their relationship has always been a professional one, or at the most, a true friendship. Even so, for a moment, Steve wonders out loud: “Why haven’t we ever slept together?” To which Joanna, honest as usual, replies: “Because we’re not in love.”

The development carries on and we are soon in the final act: Apple drops, John is fired, Apple buys Next and Steve Jobs returns. In 1998, once the world catches up with his ideas, we get to hear the computer say, “Hello,” again at the launch of the iMac.

This final chapter is probably one of the most moving as it challenges him straight to the core of things, it challenges the relationship he has with the ones who have remained around as time has passed.

So where does this leave us? With a very well written and acted film. Personally, I am not an Apple worshiper, but as Fassbender confessed during a press conference, it is hard for this type of a person not to inspire you to a certain level. Don’t get me wrong, the film has plenty of cold and extremely detached moments, but they are done in such a beautiful way that somehow it makes you realise how important they were in the overall story.

Michael Fassbender as Steve Jobs is a perfect choice and probably the image of the turtle neck man will forever remain attached to his overall image. He surprises us with very deep and emotional moments related mostly to his daughter Lisa. “I’m going to put a thousand songs in your pocket,” he tells her in a very moving scene towards the end of the movie, in reference to the Walkman she constantly carries around. He was a believer, a doer and Fassbender catches all those moments in a truly mesmerizing way.

Steve Jobs will shine some light on the man that might have been ahead of his time, but won’t explain all the mysteries. It is the sort of film that will charm and move you, but also entertain. You will appreciate the ironic dialogue and it’ll make you second guess the motivation behind certain humane decisions.