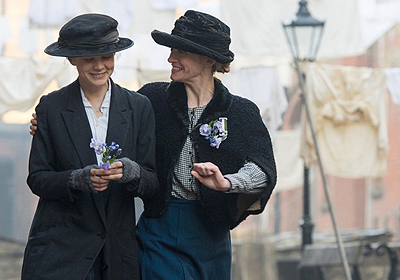 A quite well know story has finally been turned into a film. Approached from an angle of ordinary women taking part in the right to vote movement, the production is more moving than what history books might let us believe. “Suffragette” was quite an awaited movie not only because of its story, but also because of the people taking part in making it.

With a clear background story the film presents the lives of a few women seen as part of the Suffragettes. The emphasis is put on one in particular: Maud Watts (Carey Mulligan), a 24 year old woman who seems to lead quite a regular life until a co-worker takes her along to listen to a testimonial. Things don't turn out as planned and from a simple spectator, Maud ends up becoming the one testifying, as her friend Violet (Anne-Marie Duff) was in no condition to do so. With time, Maud becomes more involved and was part of the same group as Alice Haughton (Romola Garai), Violet and Edith Ellyn (Helena Bonham Carter).

Her first arrest came after finding out that the bill won’t be changed and that women’s situation was going to stay the same. The arrest made us witness a scared Maud, doubtful of her life choices. However, from that point on everything started to change.

Emmeline Pankhurst (Meryl Streep) makes her appearance briefly, but she acts as the glue between all the women involved. She is clearly there to guide and motivate “In spite of his majesty’s government, I am here! Never underestimate the power women have to define our own destiny. We don’t want to be lawbreakers, but lawmakers! […] I would rather be a rebel than a slave! Never surrender, never give up the fight!”.

The second interaction with the police costs Maud her family. Sonny (Ben Whishaw), her husband, isn’t able to cope with her being more than a wife and mother and eventually cracks under the external pressure and ends up forcing her out of their home. This, together with the ban to see George, her son, eventually brings out a different side of the character.

When back again in the interrogation room with Inspector Arthur Steed (Brendan Gleeson), she lets us see a metamorphosed person, even if the inspector constantly tries to intimidate her “If the law says I can’t see my son, I will fight to change that law! What are you going to do? Lock us all up? You can’t stop us all!”

But things still don’t get better. Sonny decides to give their son up for adoption, Violet gets pregnant and stops getting involved and the movement doesn’t seem to get the needed attention. Eventually it takes a huge sacrifice to get that craved attention of the world. It takes a sacrifice to make everyone understand their cause and the extent to which they will go for it.

When it comes to the characters, even if united by a goal, all of them are really different. Maud is basically an orphan who would do anything for her child. Carey Mulligan managed to really immerse herself in the portrayal of her character. She presents beautifully all the feelings Maud is going through: fear, loss, love, doubt, power, ambition for a better future. Helena Bonham Carter plays Edith Ellyn, the brain behind some of the actions. She plans and watches everyone’s back. It is a powerful role which fits her very well.

Anne-Marie Duff’s character and Romola Garai’s are key ones as probably the group wouldn’t have met without them. Coming from two different backgrounds, Alice and Violet put all class related arguments aside and fight for the same thing, which is inspiring. We only get to meet Natalie Press’ character further along, but she is the one that makes the decisive move and she also sees something in Maud. Emily is the one who passes to Maud the book “Dream”, first read by Emmeline Pankhurst and then passed on to key people of the movement. As they put it “They’re all feet of those who shall follow you. Lead on!”

The men have supporting roles, however still important ones. We witness different typologies and ways of thinking. Men of the government following blindly the letter of the law without second guessing its need for change, supervisors abusing their power and sometimes the young women with whom they should only have work relationships with and also husbands. Some of these, like Hugh, Edith’s partner, are involved, supportive and sometimes advisers to their wives, yet others, like Sonny, are simply not able to deal with what having a Suffragette as a wife means. All of them however have their own role that weighs quite a bit when it comes to the final story.

“Suffragette” is a powerful motion picture. It’s a film about ordinary women who tried to achieve extraordinary goals when everything was against them. It is a movie about the power of perseverance, one that should make us all pause and think how much we have achieved and how much more we still can. Go see it, if not for the story, nor for the talent taking part in it, at least to remind yourself of the incredible potential we, human beings, have.