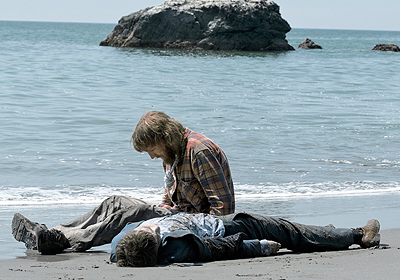 "Utterly stupid and simply hilarious, Dano and Radcliffe make quite the team"

As a bearded dishevelled man stranded on an island attempts to hang himself, a corpse stops him in his tracks. A corpse that distracts him enough by farting to reconsider ending it all anyway. Cut to Paul Dano, riding Daniel Radcliffe like a jetski as his decomposing body produces enough flatulence to whisk him off to safety. Yes, it's ludicrous; it's immature but boy Swiss Army Man is utterly brilliant.

The duo behind the scenes, The Daniels, Dan Kwan and Daniel Scheinert bring a certain charm to this far out tale of survival - and above all, they somehow make it work. Body jokes are what school playgrounds and naughty children are made of but if you can leave the British snobbery at home (don’t deny it, we are all snobs one way or another) and accept it for what it is, this film will have you in fits of laughter from start to finish. With the small ounce of hope provided from Manny, in this still pretty dire situation Hank (Dano) starts talking to and dragging this corpse around with him - a morbid image, that’s for sure. 20 minutes in, as the Harry Potter star Radcliffe just lays there; motionless, and still thoughts of will he talk and what's going to happen here dawn on you. And quickly, before you know it tears will be trickling down your cheeks and the row of cinema seats start to shake violently as snort worthy laughter consumes this surreal story.

On their slow, yet extremely profound journey back to civilisation, Manny falls in love with a picture of a girl on Hanks nearly out of battery phone (thank goodness he didn’t have an iPhone). Consequently, and strangely this ignites even more life into his limp body. If constantly passing wind wasn’t enough, just add an erection that doubles up as a compass and this is what you get. Desperate to get home and meet this beautiful woman – Manny’s excitement is vital in changing the way Hank sees the world. Albeit, when Hank tells him that he is different and people might make fun of him and of course farting in front of people is certainly out of the question, the underlining message takes hold. As the magic is quickly whisked away and the truth revealed, the film takes a plunge into deep meaningful territories that in amongst the hilarity restores the equilibrium quite nicely.

A large percentage of the population will probably take one look at this bizarre poster and read the synopsis and think Bridget Jones is a better bet this weekend. Although, this well and truly re-defines black comedy as we know it. Being so far out there and beyond the realms of usual cinema tropes any cinema lover should give this a go and relish in all its eccentricity. Consisting of a wealth of stellar content, it’s hard to pin point a favourite scene as the film itself seems to be one elongated outlandish moment between these two peculiar men, one alive and one dead. Friendship blossoms, gas (copious amounts) and sing-songs are shared resulting in knicker wetting funny scenarios that will honestly stay singed on eyeballs for days. Radcliffe holds his own or should we say Dano holds him up as the floppy jawed, bodily fluid spilling corpse, alongside an unhinged flawed Dano who gives us a beautifully damaged performance to digest.

Swiss Army Man, is crazy, weird and wonderful. Radcliffe and Dano make this film all it is and the Jurassic Park theme tune is sure to mess with your head. The message, yet delivered in various forms of liquids and gas is a weighty one indeed. With enough charm to accept the fact that most of Radcliffe’s lines consist of impressions of whoopee cushions, The Daniels have certainly given us an Indie flick to talk about.