The Colony(2016) by Gloria Daniels-Moss 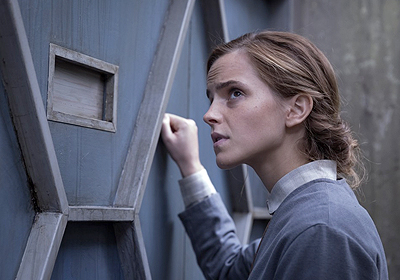 The Colony, previously named Colonia was a pleasant surprise at times; but the crystal clear Hollywood sheen placed over the top successfully bombards any sort of emotion we are supposed to feel for these characters. Escaping the infamous Colonia Dognidad is an amazing feat. A sect that tortures, experiments and abuses anyone whom enters their doors, such a place is a living hell.

Enter Lufthansa air hostess Lena (Watson) and her German activist of a boyfriend Daniel (Brühl) who seem to be having a ball of a time; cooped up in his shoebox of an apartment, enjoying their precious time together. Yet, when they become linked to a Chilean military coup, in an attempted to rise up against harsh regimes, Daniel is snatched by General Augsto Pinochet’s secret police and shipped off to Colonia. After all, this is the 70’s, protests and riots were happening on the hour, every hour and here it seemed as if the police were arresting anyone and shipping them off to wherever so they didn’t have to deal with them. Lost without her Daniel, Lena decides to go undercover an attempt to rescue him.  Oh yes, all very romantic and tugs on all the right strings, but given the fact she puts herself through this, risks her job and ultimately her life for her boyfriend, there are only a handful of on screen moments that the two truly exuberate passion. More chemistry should have been involved.

What we have here is a classic prison break plot – the problem is, we know exactly what is going to happen. As much as we see the two suffer, we know they are going to overcome this religious cult come Nazi torture chamber. This may be based on true events but it’s hard to wade through industry clichés and shock scenes for the sake of shock scenes, it damages what could have been a box ticking script by Gallenberger and Wenzel. We are given a hard hitting narrative, that at times is breathtakingly real considering its subject matter, but at times it felt as though our on screen couple were trying too hard to convince us they were actually stuck in this awful situation. Cheesy danger tactics, with a dramatic soundtrack to aid it.

For the most part the acting was spot on, yet Watson and Bruhl were given drab, flat lines that only attempt to outline their love for each other and nothing more. It's a real shame more screen time wasn't given to the perfectly theatrical performance provided by Michael Nyquist's insane leader of the camp Paul Schafer. This man makes you utterly detest him after seeing (or the snippets we are allowed to see on such a rating) his use and abuse of his followers, it is later revealed he has virtually everyone in authority under his thumb. Lucky for these two, Lena has access onto all planes as she is an airhostess, apparently and in the nick of time gets them out of danger. The hero’s escape, of course.

This is very much a lost chapter of history. The secret’s surrounding it, links to the military, the government, even higher ensured the full truth never got out. A chapter that is truly fascinating and if all of the sloppy romance, freshly brushed hair and perfect eyebrows were stripped away, maybe we could have caught a glimpse at a hard-hitting insightful project. So many myths and fabrications of such a place, that it’s been lost. All we are given to place things in any sort of order is a few lines at the start and end, which simply isn’t enough.