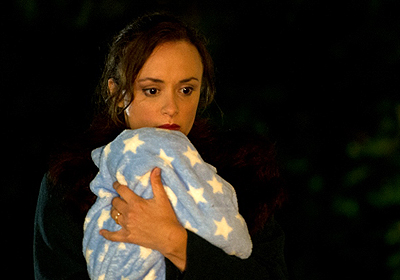 "the mystery of what’s really happening is quite intriguing, interesting and inventive"

The Final Haunting introduces us to Lily, an emotionally disturbed young woman plagued by nightmares that appear to depict some traumatic past experience. She seemingly has no family and her only friend is an elderly blind lady who used to work as a psychic and, as we meet her, is advising Lily on how to keep out the evil spirits (dare I say demons?) that plague her dreams.

We’re then dragged into a bizarre, needless plot thread about her meeting Chris, a charmingly awkward young man who stumbles around trying to ask her out in the park. The two of them then proceed to clumsily dance around each other and eventually become a couple, but feel free to forget that as it’s basically pointless despite taking forever.

More importantly to the plot, Lily’s on a job hunt and it’s not going well, until she spots an advert in an agency window for a babysitting job that she jumps at. The job, it transpires, is in a big house in the middle of nowhere where a creepily and overly attached mother, Samantha, and her frustrated husband, Tom, live their bleak, unhappy lives. Tom practically drags Samantha out of the house but not before setting out the rules of the job, such as don’t go into the cellar and don’t touch the creepy painting hanging over the stairs, because he seems to be one of the few characters aware that they are in a horror film.

Soon the proverbial starts to hit the fan and is tormented by something playing on her personal fears whilst it tries to steal the child she has been tasked with taking care of. Without spoiling, it plays out inventively, and whilst it’s perhaps not as clever as it thinks it is, the movie at least has more to offer us than a few bumps in the night.

Chris, as previously mentioned, may have a part to play in the overarch of the film, but he serves no real purpose during the main storyline and for what little involvement he has there’s no reason we couldn’t have simply had him established right at the start, which actually would have helped flesh out Lilly.

Negativity aside, the story of the haunting itself is well constructed: the atmosphere is thick, the pacing is tense, the mystery is interesting and the scares are scary, which feels like the bare minimum requirement in a horror film but you’d be surprised how many fall at this first hurdle, the mystery of what’s really happening is quite intriguing, interesting and inventive

On a side note, I’m actually not clear what exactly was happening. I understand the ‘truth’ of the haunting but can certainly make assumptions, yet struggle to follow what they are talking about.

The Final Haunting seems unaware of what its strengths are. The spooky stuff works great but the bigger character building and deeper meanings all fall a little flat, despite Pearl Chanda doing an excellent job of adding real vulnerability to Lily.