The French Dispatch(2021) by Federica Roberti 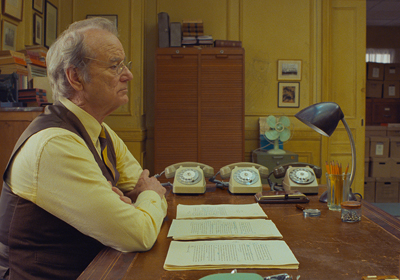 "It is fascinating to see how Anderson depicts the ins and outs of a newspaper operation, and maybe this is the reason why it becomes quite difficult to bond with the story itself"

The latest work of art from Wes Anderson, The French Dispatch is a quirky love letter to journalism and story telling in a time in history were it was extremely easy to get lost in fake news.

Set in a tiny French city, the movie is divided into multiple chapters, each according to a segment published in the last issue of the magazine The French Dispatch.

When looking at his past work, The French Dispatch doesn’t come across as Anderson’s finest work; although the scenography is always spectacular and it resembles walking into a pop up book filled with the brightest pastel colours and the quirkiest characters ever, the plot of the film is slightly weak, mainly because it feels like the audience is watching a mini series divided into chapters disconnected from one another.

Like any Wes Anderson movie, it is worth watching The French Dispatch just for the cast ensemble alone. From Bill Murray to Tilda Swinton and Owen Wilson it is reassuring to see how he always choses artists that he trusts and who always know how to make his story work.

Their performances, along with the unique style Anderson has now mastered, makes the movie fly by, it entertains, but doesn’t make the audience emotionally connect with the story although there could be plenty of chances to allow a connection.

It is fascinating to see how Anderson depicts the ins and outs of a newspaper operation, and maybe this is the reason why it becomes quite difficult to bond with the story itself. News is not meant to be something emotional, but it is just there to inform and give an objective view of our reality, and in The French Dispatch what is valued the most is getting the new edition out no matter what.

With The French Dispatch, Wes Anderson gives the audience a glimpse into the headquarters of a fictional newspaper and it gifts the audience with a break from a reality that has gotten too heavy.