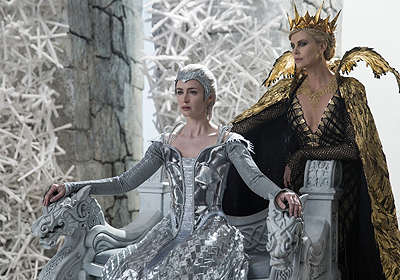 "Visually speaking, The Huntsman: Winter’s War is an absolute delight. The effects, grandeur of the battle scenes, and the black and gold on the silvery white background offer true spectacle and scope"

For anyone who’s confused about this sequel/prequel of sorts, let’s specify that The Huntsman: Winter’s War predates the whole Snow White war and it ends after the evil Queen Ravenna (Charlize Theron) has presumably been defeated.

The addition to this duo is Ravenna’s sister, of whom we get no mention in Snow White and The Huntsman, who has her own kingdom, albeit a very cold and lonely one, to take care of. Freya, the young Ice Queen (Emily Blunt), has spent the years after the death of her child in a remote, wintry palace raising a legion of deadly huntsmen; all taken from their families at a very young age.

Among these huntsmen of hers, we find Eric (Chris Hemsworth) and Sara (Jessica Chastain), the two most skilled warriors who make the deadly mistake of falling in love and seeking a life together in a kingdom where the word ‘love’ has been almost erased from existence. Of course, Freya doesn’t take this lightly and the choice she makes in regards to the lovers will later affect the development of the story.

The surprise, which isn’t really a huge one, is the return of Queen Ravenna, who, even if being a guest of the Ice Queen, takes full advantage of the army she seems to have at her disposal. When however, she loosens her tongue and the truth about the life Freya could have had comes to light, the two sisters discover their blood bond might not be able to endure quite everything.

Chris Hemsworth and Charlize Theron are now at their second roles in this connected story and they naturally go back into their characters. She is still the heartless, self-centred witch; he is still the brave Huntsman willing to help. The only difference is the fact we get to see more of their past and maybe this will help you understand better some of their choices.

Jessica Chastain as Sara is quite fierce and she brings to the character her own charm. Emily Blunt portrays the role of a powerful woman who only made some of her choices based on the manipulation of her sister. She delivers a character that seems both cruel and caring, and that isn’t easy to do.

The biggest problem here is the pace. The build-up for the main battle, which is less than a quarter of the film, is incredibly long and tedious. They move too slow and too late to what the audience might have wanted to see more of and that affected my overall reaction to it as a whole. However, the funny moments dropped here in, mostly by the dwarves or Huntsman himself, allow the audience to detach themselves from the general dark situation the characters find themselves in at times.

Visually speaking, The Huntsman: Winter’s War is an absolute delight. The effects, grandeur of the battle scenes, and the black and gold on the silvery white background offer true spectacle and scope. And that, considering the unsatisfactory tempo of the film, does help the outcome somewhat.