The Invisible Man(2020) by Hannah Wales 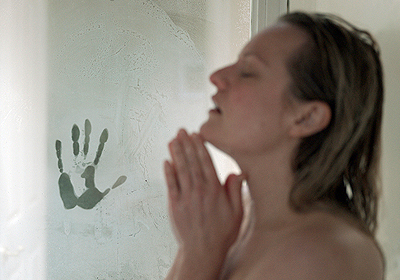 "it’s super intense and there are moments of unbearable tension, but it’s less of a horror and more of a character-driven psychological thriller about domestic abuse"

I was concerned The Invisible Man would be an extremely silly and gimmicky movie but I should have had more faith in horror genius Leigh Whannell and known he wouldn’t do that to us. Instead he has taken the classic story and given it a radical and modern update.

The film opens with Cecilia (Elisabeth Moss) escaping the home she shares with her abusive boyfriend, tech whiz Adrian Griffin (Oliver Jackson-Cohen). She feels slightly relieved when it’s reported that he’s committed suicide, but she soon gets the sense he’s still around – that’s because he is.

If you’re hoping for a simple scary movie, you might be disappointed with The Invisible Man. It does have a couple of jumps scares, it’s super intense and there are moments of unbearable tension, but it’s less of a horror and more of a character-driven psychological thriller about domestic abuse.

The Invisible Man has been done many times before but Whannell has created something very different. He has taken the material and interpreted it in a completely new way, turning it into something that’s timely, modern and (mostly) grounded in reality. Adrian ultimately doesn’t become invisible to scare Cecilia, he uses it to ruin her new life and isolate her from her loved ones so she’ll come back to him. She is gaslit, nobody believes her, and it starts to look like she’s gone crazy.

Whannell has crafted the story masterfully. Adrian’s appearances begin extremely small but they are still unnerving and tense because you don’t know what he’s going to do. It gradually escalates and escalates from there until it reaches a shocking yet satisfying conclusion.

It goes without saying that Moss is terrific. It’s a really difficult part and could easily have been overdone but she keeps it realistic always. She goes from a woman terrified of leaving the house – she’s basically got PTSD – to one who takes on her invisible stalker. She’s a victim but she’s no damsel in distress. She’s empowered and is determined to sever her ties from Adrian once and for all. Moss has fine support from Aldis Hodge as her friend James, who lets her crash at his house, and Storm Reid as his daughter Sydney. As much as they love her, they can’t believe her story, especially after Adrian does things to make her seem dangerous.

If you’re expecting something along the lines of Hollow Man, you will be underwhelmed by The Invisible Man because it’s not very scary. However, it is an intense and thrilling story about domestic abuse that feels very timely and relevant.