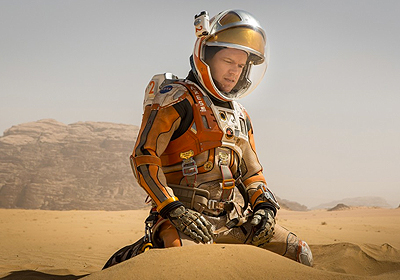 There are two things that will occur to regular film goers whilst watching The Martian: Matt Damon (Interstellar and Saving Private Ryan) has been left behind somewhere nasty again and if you get stuck somewhere as nasty and as inhospitable as Mars you better hope you paid attention in science class or have a geek to hand to help you out.

The Martian is in 3D and whilst that may seem pointless for some films from the first spaceorama of Mars you'll know why those glasses are on your face. It's visually stunning. I hadn't read Andy Weir's 2011 acclaimed novel, but I knew many who had and who were worried that it would lose some of it's brilliance on screen. It didn't. The Martian is an engrossing, entertaining and actually almost an educational film about Mars. It illuminates what is both alarming and alluring about the Red Planet and what it might take to survive on there. And therein lies the point of debate for many a geek and space fan.

The Martian opens with quite some considerable artistic licence. The crew are outside their spacecraft on Mars when an unexpected storm whips up. Whilst the bulk of the crew make it back to the spacecraft, Mark Watney (Matt Damon) is hit by some flying debris and left stranded outside, presumed dead. The crew take off and leave Watney behind. Geeks that know far more than I do about such matters will say that whilst Mars does have winds the density of its atmosphere is a tiny 1% of what we know and cherish on Earth. This means Mars's ability to whip up a storm is more akin to a fan blowing papers across a room than a fully fledged tornado.

Weir openly admitted that this was a device to force the crew to leave the planet when talking about the film release. He thought a hellish storm would be 'pretty cool' and it certainly is. It grips you from the start. But it does leave you wondering later on how some ordinary duct tape and tarp can be sufficient to plug up the 'Hab' and act as a defense against such volatile winds.

Watney's time on Mars is (understandably) one problem after another. He's got to breath, eat, drink and get himself home. No mean feat. Yet whilst Watney is tending his newly created spud space garden, back on Earth NASA are hosting a memorial for him. Watney can't contact NASA to tell them he's alive and NASA don't want to point any satellites at Mars and stick a dead astronaunt's body on TV. In order to contact NASA Watney manages to secure the 1997 Pathfinder. Once in conversation with them an international rescue mission ensues that rarely runs smoothly and faces quite a few failures until the crew that inadvertently left Watney behind decide to slingshot it back to Mars to 'go get our boy'. By this point even the geeks are quiet. It's simply too much fun and a sheer joy to watch.

If you've ever wondered what you would do if you were the last person alive on a planet The Martian not only answers that question, but asks what would you do if you were the first person to go somewhere. It demonstrates the level defiance, determination and in many cases humour in the face of cheesy disco that is needed to survive.

But above all the morals of the story seems to be if you get stranded anywhere get stranded with Matt Damon. Not only has he considerably proved his smarts in films (starting with Good Will Hunting) people always seem to go back for Matt Damon.