The Nice Guys(2016) by Gloria Daniels-Moss 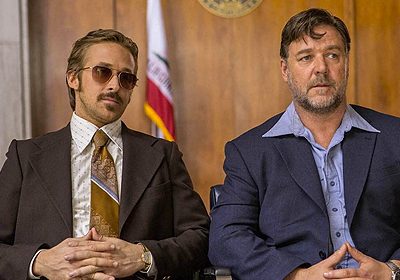 Big collars galore and various fades of leather aid Healy (Crowe) and March (Gosling) as they take it upon themselves to get to the bottom of this rather bizarre death of the busty Misty – not to mention the odd gun or two. As the two, along with the help of March’s clever beyond her years daughter Holly (Angourie Rice) get to the bottom of this naughty-movie infused case, The Nice Guys may come across as a film school check list when it comes to filmmaking. Albeit, Black has achieved something that allows nostalgia to seep through, whilst giving us something fresh and more importantly fun to chew on for two hours. This is a classic detective story, suffering from a case of violent punch ups and dark humour.

This isn’t anything Crowe can’t handle – in fact it seems the man wanted to have a bit more of a laugh on the job rather than having to build an arc or sing. Watching him own the screen as this ‘will stop at nothing’ (as long as he gets the correct change) investigator is enough to get this one going, until Gosling’s performance blows everyone out of the water. Where did this man come from and more importantly, where is he going. From the silent but violent, iconic Drive to the irritatingly annoying narrator in The Big Short, all the way to a verging on cult, stomach aching chortle providing, out right hilariously stupid P.I – by George, this guy can act.

Matt Bomer’s 5 minutes of screen time here as John Boy the assassin, was a concoction of something out of Hell’s Kitchen and Con Air, with a bit of Monty Python thrown in. Add a sharp sweeping side parting and a pistol, take away the coconut shells, the hilarity alone in his performance should give Bomer a step up. As Misty Mountains doppelganger Amelia, the Leftovers star Margaret Qualley does well as the damsel in distress. Wandering around in a half torn dinner dress, trying her best to be as political as all 18 year olds think they are and painfully trying to prove a point by making an adult film with her recently deceased boyfriend. Perhaps not the best way to air your views, but point proven nonetheless.

With possibly one of the most brutal meet cutes, if you liked Kiss Kiss Bang Bang and Lethal Weapon, then this is one for you. Jokes are a plenty, raucous laughter is sure to be had and don’t forget to watch out for the Nixon bit, you’ll know when you see it!