The Northman(2022) by Gloria Daniels-Moss 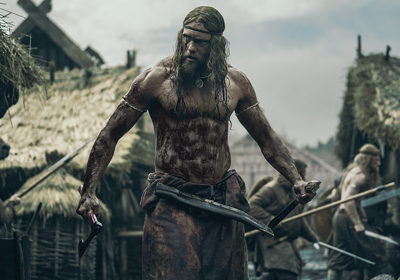 "Norse mythology at its bloody finest"

From the get-go, The Northman promised us a violent macho flick, a ton of battle cries, a sprinkling of the supernatural and a half naked covered in blood Alexander Skarsgård; and let’s just say the promise is utterly fulfilled.

Over recent years, it seems Vikings have taken over our screens (good riddance glittering vampires) – the exploration of Norse folklore and the fascination of such historic warriors has brought us many a good series binge and who better to take a stab at this time period than director, writer Robert Eggers.

With this coming from the mind who brought us The Witch and The Lighthouse; both anticipation and apprehension course through your veins, as you know there are going to be a fair few sinister moments in between the blood splatter satisfaction. Full disclosure – if you are after an action-packed ‘Thor’ inspired watch, The Northman delivers a much more artistic and at times, Shakespearean appreciation for storytelling. Intelligently set-up, we are introduced to young Prince Amleth, who amongst what appears to be a loving, warm and fun environment watches his father King Aurvandil War-Raven brutally murdered by his uncle Fjölnir and his mother, Queen Gudrún forced into becoming his queen. Years later, a brooding ‘hiding in plain sight’, sword wielding Amleth is hell bent on getting back to his homeland and avenging his father’s death. With the help of Olga’s witchcraft, he manages to make his way home only to meet his match in many forms.

Eggers offers a sensory invasion – stunning scenery married with beautifully lit close-ups, alongside a booming score and lines of dialogue distributed to match comes together to create an enthralling cocktail of violence, romance and poetic justice. As smoke consumes the screen in many a scene, it’s hard not to compare this to Polanski’s Macbeth, as well as Kidman channeling her inner Lady Macbeth without a shadow a doubt.

Not to mention, if you say Amleth quickly, it certainly does sound like Hamlet - read into that what you will. This has a flare of all-consuming darkness, in which every character on screen fully embraces. The raw, primitive nature of this tale successfully seeps through the copious amounts of blood and saliva. So much so, at times you forget you are watching big names such as Kidman and Hawke (even Björk makes an appearance), half expecting Bang to grow fangs. Albeit, we are offered a dusting of romance as Anya Taylor-Joy’s Witch finds solace in Amleth, making for some dreamy woodland scenery. Above all else, this isn’t afraid to stay true to Norse culture and symbolism, thankfully not buying into Hollywood tropes unless you can count CGI, but in the current climate it’s basically unavoidable.

The Northman offers something much deeper than an Easter Holiday blockbuster. Moving at a slow and steady wines the race pace, allowing us to truly feel Skarsgård’s Amleth’s seething hatred for his uncle the long awaited eruption of this tragedy is worth every drop of blood and tear shred. You certainly won’t want to take the kids to see this one.

Move aside Beowulf and Outlander, The Northman are here!