The Sacrifice(2016) by Phil Slatter 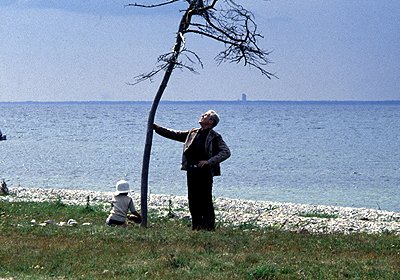 "this is not a film about an invisible presence that may or may not be real, but about mankind’s desire for survival"

There is a sense of irony that Andrei Tarkovsky’s The Sacrifice, the final of his seven masterpieces, was made just before the director was diagnosed with terminal lung cancer. For the film centres around an incoming apocalypse, a deal with God and the delaying of our own immortality. It is about the very nature of the human condition in the way that so many great films are, and in a way that Tarkovsky turned into an artform during his career.

Erland Josephson plays Alexander, a man who, in the face of a possible nuclear apocalypse, makes a deal with God to sacrifice all he holds dear on earth in order for the apocalypse to be averted.

Religion was always relevant to Tarkovsky’s work, be it the role of a paradise that runs throughout Stalker or the notion of life after death at the centre of Solaris, but here the role of God is at its most overt. With his trademark long takes which are often at something of a distance from the characters, the camera fills the role of the presence of a deity, ambiguous by its role and never interfering directly but none the less hanging over mankind in the way it has throughout human history.

Yet this is not a film about an invisible presence that may or may not be real, but about mankind’s desire for survival amidst our very own development as a race. Technological advancements provide little more than comfort as Alexander explains to his son early on, while those self-same technological advancements hover over the house when the potential darkness approaches. As humanity continues in its search for answers throughout the universe, The Sacrifice argues that there is no such thing as a final truth, yet we are all waiting for something. And what do we do when the end potentially arrives? Sacrifice all that we have built to in our time on the earth we have known?

As always with Tarkovsky, the questions are asked but the answers are never present for the simple fact that there are no easy answers to such meaningful ponderings, though a God may be there asking them. God, or in this case, Andrei Tarkovsky.