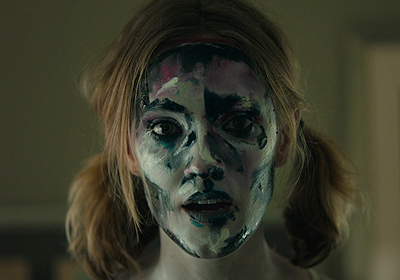 Joe Burns (Joseph Cross) is an aspiring documentary filmmaker who is working as hard as he can on his next narrated documentary about The American Dream, his wife Joanne (Alexia Rasmussen) is expecting their first child together, so things should be on the up and up for Joe... only in his mind it's not.

Joe eventually has a serious psychological case of 'Writers Block' that eventually (key word 'eventually) sends him on a rampage through the dirty and seedy late night alleys of Los Angeles where he lets his primal rage come out to play. All because of his obsession to make his dream project a reality.

This is a film that crawls at a snail's pace with its story telling about a frustrated filmmaker who just wants to make his project happen and seeks a means to channel his frustrations, HOWEVER I do have to give Director Kasra Farahani credit for THAT third act where it all kicks off!

I think TILT is one of those films that may be more appreciated the more times you watch it as it has an interesting (and at times disturbing message) about obsession and how we act out when things in life just don't go our way. The movie throughout has a very unsettling atmosphere which miss matched by a pretty decent score by Lucas Putnam.

A dull movie that does pick up towards the end which does leave you thinking about the message of the movie itself.