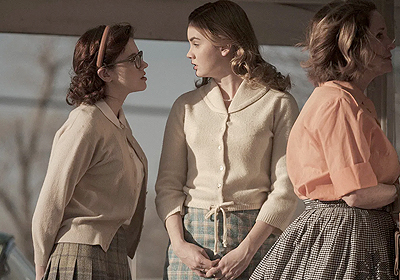 "Despite two winning lead performances, To the Stars is misjudged and uneven "

To the Stars, directed by Martha Stephens and written by Shannon Bradley-Colleary, had its debut at the 2019 Sundance Film Festival and is finally available for digital download from 1st June.

Set in a small, god-fearing town in Oklahoma in the 1960s, Kara Hayward (Moonrise Kingdom) stars as Iris, who has a difficult relationship with her mother Francie (Jordana Spiro) and is bullied at school because she still wets herself. Her life changes when the charming and enigmatic Maggie (Liana Liberato) moves to town and makes friends with her, despite others warning her it is social suicide, and helps her come out of her shell. However, Maggie is hiding a big secret of her own and when that gets revealed, Iris needs to stand up for her friend and herself.

Iris’ storyline is uplifting and lovely to watch. It was so nice to see her find that confidence and stand up for herself for once. However, this story is basically sidelined towards the end by Maggie’s big revelation. Although her plot is worthy, interesting, and moving, it felt weird to be suddenly focussing on Maggie when it had been Iris’ film up until that point. To The Stars essentially feels like two films because these two storylines aren’t woven together in a seamless way and the decision to swap focus didn’t really work.

I was blindsided by this switch in perspective because Maggie's storyline wasn't foreshadowed much so her revelation basically came out of nowhere and her actions felt out of character. I would have liked more information and more context about it and I would have liked the ending to have been less ambiguous. This could have been fleshed out into its own movie, rather than hijacking Iris’ coming-of-age tale.

Both Hayward and Liberato give impressive performances and make this film better and more watchable than it is. They made this quiet, slow-moving drama interesting and I was invested in their characters, despite the narrative issues. Shea Whigham also shows up in this as Iris’ father, but he is barely in it. This is the same with Malin Akerman and Tony Hale as Maggie's parents. They are probably in about three scenes each, and although they get to do emotional work in the final scene, I’m surprised they signed up for such a small job. As I associate Hale mostly with comedy, he felt miscast here and I didn’t believe him as her strict father at all.

To the Stars features a sweet, uplifting story and a shocking, moving one but it just doesn't know how to make them work together, but although the narrative is uneven, it is anchored by two impressive lead performances.