Train To Busan(2016) by Kristian Mitchell-Dolby 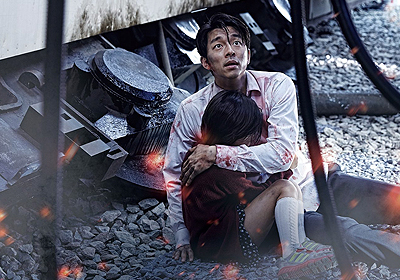 When it comes to his daughter Seok Woo isn’t neglectful he’s just one of those workaholic Dad’s who is perhaps a little more selfish than the average person and doesn’t really know how to relate to a ten year old girl. He and his wife are separated for undisclosed reasons and Soo-an is missing her mother desperately. For her birthday she asks that she can visit her in Busan even if she has to go by herself and after much anguish and with great reluctance her father agrees. They board the KTX train from Seoul and so their journey into hell begins.

You see unbeknownst to Seok Woo he is actually saving his daughter as he and the other passengers of the train are inadvertently fleeing an industrial accident that is rapidly turning the inhabitants of Seoul and indeed much of South Korea into a horde of ravenous zombies. Unfortunately the virus has found it’s way onto the train and whilst they slowly learn of the country collapsing around them the passengers find they must fight for their lives and hope that somewhere along the line they find safety. Seok Woo is about to learn he has to be a better father and person in the harshest way possible.

You might know this movie as that South Korean zombie film people like me won’t shut up about and it definitely lives up to the hype. I went in excited for this film (often a dangerous prospect) but I was not disappointed in fact my expectations were exceeded, and as neither a fan of horror or zombies this is saying something. My DVD collection in this category pretty much consists of the original Evil Dead and Shaun of the Dead, but will soon include Train To Busan as well.

Our cast is a relatively typical cadre of disaster movie cannon fodder, Seok Woo is our average man just trying to keep his daughter alive, there’s a tough heroic type guy trying to protect his vulnerable pregnant wife, a pair of teens working out their feelings for each other, an old lady who doesn’t stand a chance, and a selfish panicky jerk whose bound to get several people killed before he gets his comeuppance, but the slightly predictable nature of this set up just doesn’t matter. The characters are all well rounded and sympathetically flawed (except the jerk, he can suck it!) and even the expanded cast, because there’s a whole train load of people to deal with here, are more than just victims in waiting, the horror of the outbreak feels real and terrifying even as it spreads through the nameless crowd.

It’s also nice to see a zombie movie where the zombies are a real threat. I know that sounds weird but most of the time the problem in a zombie apocalypse seems like the other people who are stuck in it with you. Here the zombies are a relentless terrifying horde turning people into a rabid frenzy, you really get the sense that all they want to do is kill, and not for any purpose just because they need to. It’s scary and the mechanics of it are played out familiar enough that they don’t need to waste time explaining what’s happening to us, but also with a couple of interesting new twists that fit neatly into the story and add to the tension in some extremely well crafted set pieces.

I honestly can’t praise this film enough, I absolutely loved it. It is the perfect blend of humour, action, emotion and horror, never being too heavy on any one but performing each with grace and ease. Dong-seok Ma as a man protecting his pregnant wife is easily the most kick-ass character in this genre you’ve seen since Woody Harrelson in Zombieland, except that Woody was playing it for laughs and here you’re completely invested in the characters struggle, fearful for his survival, torn up over his anguish and cheering at his heroism.

If you’re a horror fan and a zombie movie fan in particular I don’t know why you’re even asking me if you should be watching this film, just get out and see it. And if you aren’t but are curious you should still get out and see it, I don’t think you’ll be disappointed.