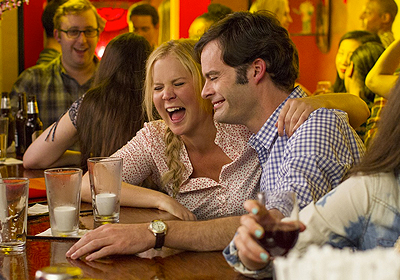 "Through all the emotional disarray, the family undertones are a nice touch"

Rom-coms are, in many ways, like cars. They are made on a production line serving only one purpose and come in lots of shapes and sizes. But like cars, when you see a really good romantic comedy, you won't want to take your hands off the steering wheel.

From the genius that brought us Bridesmaids comes Trainwreck, a clichéd, run-of-the-mill - wait for it - love story; albeit with extra spice that is perfectly sprinkled in by Amy Schumer.

This female comedian has recently taken on social media and swallowed it whole creating a rather large following. Now starring in the limelight as the awkward and, at times, outrageously absurd yet extremely likeable ‘Amy’, this budding star certainly shows us what she's made of.

Despite being given a formulaic plot that this genre follows religiously, Trainwreck has something so charming about it, you can't help but smile. There is an overload of crude, distasteful jokes and this isn't short of repetitive dialogue that will make you roll your eyes, but the underlying message captures the romantic in all of us.

Schumer isn't afraid to make herself look like hell on-screen nor does she give a monkey’s about what people think. This results in a much more relatable character than all the prim and proper girls who usually consume rom-com screen time. We are presented with hilarious flashbacks of her devil may care attitude that may (perhaps) stem from the unforgettable opening scene about dolls her father gives her and her little sister, Kim. Amy is in a rut and whilst her sister is happily married and pregnant, her life is far from ‘normal’.

In between sleeping with a rather hefty percentage of the male population, smoking weed and guzzling tequila shots, Amy works for a barely recognisable Tilda Swindon as a journalist. Struggling to impress her boss in order to land the Editor-in-Chief role, Amy takes on a sports story which would usually bore her senseless, until she falls for sports scientist Aaron (Bill Hader). Developing more than just one night stand feelings, Amy realises that a normal life might be on the horizon, replacing her substance-induced trip she is so used to living.

Through all the emotional disarray, the family undertones are a nice touch. A tad sickening at times but a welcomed break from the constant overflow of infantile humor. Amy does rely heavily on her array of facial contortions, yet we do get a glimpse of her acting ability rather than just well-timed expressions. At just over 2 hours, its predictability unashamedly seeps through the seams of this otherwise fresh and funny take on relationships.

If you are a sports fan, especially a Basketball lover, you are sure to enjoy this one. With an unexpectedly hilarious performance from Daniel Radcliffe, Trainwreck stands above the majority of regurgitated rom-coms on the market. A film not without its faults, it’s a very entertaining one nonetheless.