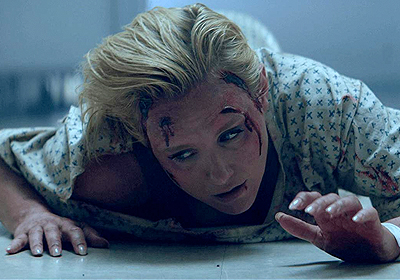 "The tension throughout the film is palpable, keeping you gripped every step of the way"

Matt Eskandari's Trauma Centre is a fast paced Action film that keeps you on your toes, the premise is rather simple; bad cops trying to cover their tracks by hunting down an innocent bystander who inadertedly gets shot whilst she is in the wrong place, at the wrong time.

Whilst it is a simple premise, don't let that fool you into thinking it isn't worth watching, it completely is, seeing Nicky Whelan as the bad ass protagonist Madison is worth the price of admission alone, throughout the film, her want to survive is one of the best aspects of the film; you root for her whilst she does everything she can to evade capture in the locked down hospital.

Whelan's Madison is definitely the highlight of the film, as she uses everything she can think of to survive, it's refreshing to see, since it would be easy to fridge her in favour of Bruce Willis' Detective Wakes, Willis is little more than a cameo, as we follow Madison, he checks in from time to time, but Madison is her own hero, which is awesome to watch!

The tension throughout the film is palpable, keeping you gripped every step of the way as you wonder "how is she going to get out of this?"

Madison is largely isolated throughout the film, but the few scenes she shares with her younger sister Emily (Catherine Davis) are believable, you believe the pair are siblings on the other side, a strong hero needs an equally strong villain, and in this case Madison has two; in the form of the impossing Sergeant Tull (Texas Battle) and Detective Pierce (Tito Ortiz), the pair are relentless in their pursuit of Madison, at first having one clear goal - to retrieve the bullet out of her leg that can implicate them in a crime, as the film progresses, the pair become more villainous.

All in all, Trauma Centre is a great film that showcases the lengths people will go to to survive, the film does't work without the strong performances on display here across the board.