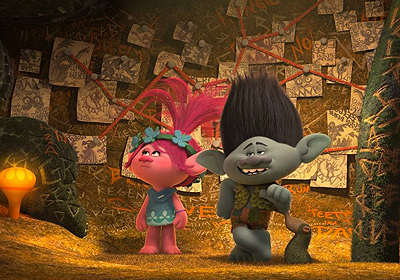 Inspired by the famous dolls invented by Thomas Dam, Trolls is the latest DreamWorks creation to grace screens all over the world with a simple story about being positive and happy in life even when everything seems to go wrong.

The plot is pretty simple but effective; after 20 years of living peacefully and safely in the forest while spending their days singing, hugging and being happy, Princess Poppy (Anna Kendrick) and her troll friends are in grave danger again when the pessimistic Bergens, sad and out of tune monsters that can be happy only after eating trolls, find them and are ready to reinstate their Troll Feast to finally find joy.

After seeing all her best friends captured by the vengeful Chef, with the help of the only realistic troll in the group, Branch (Justin Timberlake), Poppy sets out on a quest to save her friends from the Bergens’ mouths. Throughout their journey, both Poppy and Branch learn a valuable lesson from one another and they discover where real happiness lies and that sometimes in life a good balance between joy and realism is never wrong.

Directed by Mike Mitchell and Walt Dohrn with a subject created by Jonathan Aibel and Glenn Berger, Trolls is one of the best products DreamWorks’ has offered since the ever popular Shrek.

The animation is flawless and the world in which the Trolls and Bergens live seems made entirely of felt. To divide the two realms, however the use of colours becomes predominant. In fact, while all trolls live in harmony in a colourful and vibrant reality that screams of happiness, joy and love, the Bergens are condemned to live in a dull and sad world without brilliant tones and music.

Each character reflects their personality through colour as well, every single Troll has a different shade and the more cheerful they are, the more shiny and sparkling they get. Bergens, instead, have a more subdued complexion that matches the one used in their world. Their spectrum moves between the shades of dull grey and green just to further highlight their eternal state of sadness.

Among the Trolls, Branch is the only one that sticks out for his subdued and flat tinge. He is different from other Trolls. His past has made him realise that life isn't always cupcakes and rainbows and his cynicism and realism makes him a party pooper like all the other Trolls like to define him as.

Among these fantastic creatures, he is the only one that can help Poppy save their friends because he knows how to defend himself from the Bergens. While they are one another's polar opposite, over the course of their journey, they grow closer and learn to become friends by balancing their personalities and ending up being the true heroes of the movie, showcasing the hidden meaning of the story.

Behind the songs and funny jokes, lies the morals of the film, which highlights that in life everyone needs a spark of joy to make every day a bit better, even when everything seems to be going wrong, happiness is inside everyone and in order to truly feel it, we have to look within us and not outside, because no one can make us feel better if we don’t really believe it.

What makes the movie spectacular to enjoy, is not only the amazing artwork used to bring to life the famous dolls, it is the comic banter and the stellar soundtrack which are essential parts of the story.

Singing is one of the Trolls’ favourite activities and many famous songs are used in the movie to set the right mood and keep the flow of the film going. The cast ensemble chosen to voice the many characters is made of famous singers as well as brilliant actors that show their vocal talent in singing some of the most famous remakes. From Cyndi Lauper’s “True Colours” to Earth, Wind & Fire’s “September”, the songs keep the rhythm of the movie alive and kicking throughout and the many jokes and banter used in the character’s interaction help keep the tone of the movie always upbeat and cheerful.

All in all, Trolls is a great family film that, by employing a great soundtrack as well as an impeccable comedy timing, shows that in Hollywood even a simple concept can be extremely successful and make both children and adults want to dance around in their seats.