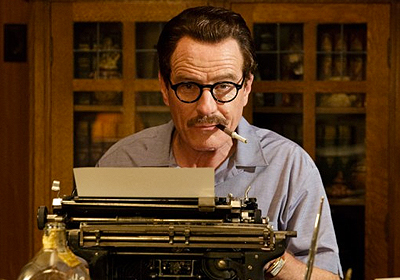 "The ensemble works effortlessly as a well oiled machine to bring this story to life. Once again, Bryan Cranston shows what it really means to fully understand a character in all its aspects"

Trumbo is among those movies that successfully represents, through glamorised historical events, social and political matters that are still relevant nowadays.

The main topic discussed in the film is the violation of the basic human rights of expression and political freedom during the period between the 1940's and 1960's in America. However, instead of telling the story of ordinary people with liberal ideas being persecuted by the government because they’re considered communists and pro-Russia, Trumbo shows a different angle of the story by focusing on the Blacklist period during Hollywood's Golden Age.

In particular, Jay Roach's movie decides to bring to the screen the story of Dalton Trumbo, father of many of the most famous classics in cinematic history, such as Roman Holiday and Spartacus. During the Cold War, the US Government began its period of intense paranoia and fear of Russian spies infiltrating the country. In this historical period, known as McCarthyism, many American citizens, accused of being communist, were prosecuted for treason.

In Hollywood, the House Un-American Activities Committee (HUAC), supported by many well-known figures in the industry, like John Wayne and Hedda Hooper, started a campaign to smear the reputation of some of the most celebrated actors, producers and screenwriter who had liberal opinions, creating a list that will be forever known as The Hollywood Ten. A nine day trial followed by their incarceration and a boycott to stop the productions of their movies occurred.

Throughout this defamatory campaign, Dalton Trumbo decides to fight with the only weapon in his possession: words. Celebrated for his stinging, brilliant and fluid style in his script, Trumbo, in an attempt to defeat the wrongful accusation against him and his colleague, decides to keep on writing stories, selling them under numerous different pseudonymous, in order to prevent the Government from censoring his art.

What raptures the audience's attention from the very beginning is the jazz music accompanying the plot with its pressing rhythm. Thanks to John McNamara's script, the story is dynamic and the tempo is invigorated by the sarcastic and cutting irony in every dialogue. However, the film's comedy aspect is well-balanced by some dramatic scenes in which the camera shows the sacrifice that Trumbo, his family and his friends and co-workers had to make to fight against this unlawful censorship imposed by the Government. And it is precisely this counterbalance between comedy and drama that makes the movie even and prevents the more serious themes to be treated with carelessness while still keeping a lighter tone in the plot.

The ensemble works effortlessly as a well oiled machine to bring this story to life. Once again, Bryan Cranston shows what it really means to fully understand a character in all its aspects. He is able to absorb Trumbo's gestures and habits, making them his own. He truly becomes the famous screenwriter even though this was a challenging task to accomplish, since Trumbo is a movie about real people living through difficult times.

The rest of the cast isn’t overshadowed by Cranston's performance. Diane Lane and Elle Fanning's perfect portrayal of Cleo and Nikola Trumbo showcases their strength during the blacklist period, supporting Cranston's work brilliantly.

Moreover, Helen Mirren's Hedda Hopper is sharp and irreverent in her fight against communism, recreating the real animosity between Hopper and Trumbo effortlessly. Its cinematography moves from glamorised shoots, made with bright and warm colours, to black and white scenes to remind the audience that those facts reported on the screen really happened.

Instead of using real footage taken from historical archives, Roach decided to reenact them with the cast and reintegrate and edit them into the movie using colour saturation. In telling the story of a man ready to lose everything in order to see his work finally acknowledged as his, Trumbo is a great film that not only wants to remind us that politics should never interfere with art but also highlights that most of the time preconceptions and fear are the main causes in all that is bad in the world and the only way to defeat them is believing in yourself and in your ideals.