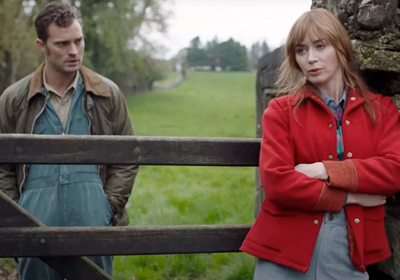 "the film is beautiful, the sweeping landscapes are breathtaking and are backed up by wonderful performances"

Written and Directed by John Patrick Shanley and based on his play Outside Mullingar, Wild Mountain Thyme is set in rural Ireland, and tells the story of the families of neighbouring farms, who enter into a land dispute.

First off, the film is beautiful, the sweeping landscapes are breathtaking and are backed up by wonderful performances from the leads Emily Blunt and Jamie Dornan as star-crossed lovers Rosemary and Anthony respectively, who don't ever seem to share with eachother how they feel, until they have no choice to do so or lose eachother completely.

Blunt is great in the role of Rosemary; she's believable in any role; her character is feisty and can be stubborn, but under her bravado, there is an innocence and love for the ballet, she's the polar opposite to Dornan's Anthony, he's meek and rather unsure of himself, but they do say that opposites attract.

With supporting performances from Christopher Walken and Jon Hamm, Wild Mountain Thyme is a good time, it has a lot of charm to its whimisical nature and is well paced clocking in at just over an hour and a half, a running time that moves briskly and you never feel it. After over a year of turmoil, this is just the type of film we need right now.

All in all, the love story is sweet, and the film is infinitely more watchable with the lead performances and believable chemistry from Blunt and Dornan.