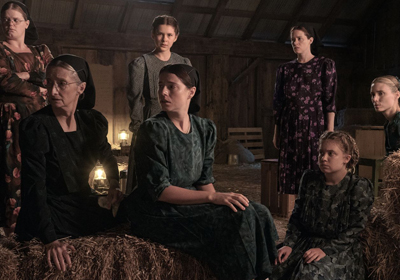 "a simple film about women trying to take space in the world. A world that tried to silence them for far too long"

Set in a remote religious colony, a group of women struggle to come to terms with their faith after they discover that each of them have been sexually abused and lead to believe that it was a supernatural attack.

At a first glance, Women Talking seems to have an absurd plot. How, in this day and age, could it be possible that a group of women could be tricked into believing that ghosts or the devil attacked them overnight.

However, the answer that Miriam Toews in the book and Sarah Polley in the movie give to their audience is pretty simple. Uneducated and sheltered people can believe everything they are told if the lie is intertwined with religion.

The story is set in 2010 and takes inspiration from real events. In a mennonite congregation in rural America, completely cut off from modern civilisation and standard education, 12 women organise a secret meeting in a hayloft to decide what to do after discovering their daughters and themselves have been drugged and abused by their own men.

The vote that needs to be cast is: staying and forgiving, as their faith preaches, staying and fighting to create a better congregation while going against their own pacifistic believes, or leave.

While the men have all gone to the city to post bail for the criminals involved, they discuss the pros and cons of staying and fighting or leaving what was once their safe heaven and their only reality.

Sarah Polley tells this story with such a powerful and delicate style. Her camera is never too invasive but focuses on the most important details to paint an objective picture of the story. Each woman is given space to tell her opinion and, although they are not educated their composure, even in a time of crisis, is outstanding.

Although the script is majestic in its own rights, the cast ensemble is magnificent in delivering every word; Rooney Mara, Claire Foy, Jessie Buckley, Judith Ivey, Michelle McLeod and Sheila McCarthy deliver a heartfelt, honest and marvellous performance. Each woman is individual in their own right. Their past and events have shaped them to cope with their shame and the results of abuse. What is clear however is that, no matter the decision, they all lose something. Either being dignity, freedom or the reality they’ve always known and lived, they are forced to sacrifice something in order to feel safe again.

All the actresses kept their individuality and complimented each others’ performance beautifully without overshadowing one another. In a film were women are at the centre of everything, it can be really difficult to add a male supporting actor. It would be easy to shift the delicate balance created. However, this story doesn’t want to paint a hopeless picture where all men are at fault. So the role of August is essential to accompany these women in their journey, as witness to take the minutes in the meeting.

As an outsider, August was kicked out from the colony with his family for questioning the faith. He is only allowed to come back as a teacher to the boys of the congregation. His university degree is put to good use to document the secret meetings and share the results with the other men. Ben Whishaw is the perfect man for the task. August never oversteps his role. He understands his purpose in the story and offers his support in any capacity allowed. He embodies the hope for a future where the boys of the colony need to learn not to harm their mothers, sisters or wives, to construct a future where women will be treated with respect and dignity.

To be released in February, Women Talking is a simple film about women trying to take space in the world. A world that tried to silence them for far too long.