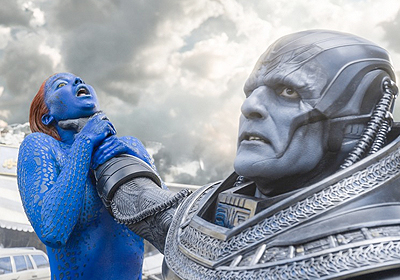 "At first glance, it seems this is paving the way for the Marvel films we are all so desperately yearning for"

Franchise after franchise, and superhero after superhero. The world seems to be going crazy for this throwback to the cleverly mastered comic genre and the mutant universe of X-Men is no exception. Arguably among one of the most interesting thought-out action, sci-fi fantasies’ out there, critics and fans alike have been let down by the recent revisiting to Xavier and Magneto’s past, despite McAvoy and Fassbender leading the way. Albeit, will X-Men: Apocalypse be the one that truly makes up for the abysmal attempt of X-Men: The Last Stand? At first viewing it seems this armour clad original mutant is paving the way for the films that we have all so desperately yearned for.

The original source that fuelled so many comics, cartoons, TV series and now films has a unique strangeness about it, an eerie sense that things aren’t always as they seem is still present here, yet did we just fall dangerously close to stepping into the dreaded disaster movie territory with Apocalypse destroying everything in his wake? Nearly, very nearly…carefully masked by humerous one-liners and a rather spectacular scene to the Eurythmics’ ‘Sweet Dreams’ carried impeccably by Evan Peter’s quirky Quicksilver come Peter. With possibly one of the most awesome, yet altogether grim and gorey opening scenes, we know this is going to have a different, darker finish to it – and if only they had truly run with that feeling we would have a masterful film indeed.

As we are taken back to ancient Egypt, where the supposed first ever mutant was worshipped like a God, we see Apocalypse in all his glory. Buried deep in the golden sands for thousands of years, he awakens for CIA's Moira Mactaggert (Rose Byrne) fortunately, or unfortunately to be more precise discovers. Upon awakening it seems all this mutant is interested in is more mutants, and oh, of course taking over the world. Creating a team of his own, we revisit the Xavier vs Magneto plotline and the birth of the ever powerful professor we all know. Oscar Issac seemed a waste under all that make up and his let’s smash things up attitude, which sadly could have been done by anyone and poor Michael Fassbender’s full of rage and bitter Eric was consumed by nothing other than old fashioned cheesy dialogue.

Clue’s in the title – there is going to be copious amounts of punch ups and in so many words, Hulk smash. Albeit there in the distance is that sparkling glimmer of hope that Fox could fully restore this universe back to its former glory. By no means is X-Men: Apocalypse a disaster of a project, it’s just an engaging film with a few too many shoddy bits of filmmaking. A filler film of a feature film as it were before this really gets going again.  Cameos and subtle hints to where this is heading are sure to keep hard-core fans at bay, whilst this younger team of mutants are destined to get bums on seats.

A conveniently placed dig at Brett Ratner’s attempt to initially give this story a decent send-off will have you chortling for quite some time. Launching into cinema’s Wednesday 18th May, Singer's X-Men: Apocalypse seems to sit somewhere in between this mass of Marvel films we are currently receiving.