German-born Serbian actor best known for his role of Colossus in Deadpool (2016).

Kapičić played the role of his own father in the 2015 film Bićemo prvaci sveta (We Will Be the World Champions) about the Yugoslavian national basketball team which won the 1970 FIBA World Championship.

By 2015, Kapičić had accumulated more than 80 roles in television, film, and theater. He made it to the second round of a secret casting process for the X-Man Colossus in the superhero film Deadpool, learning what the production was only after he passed that round. Working with first-time director Tim Miller in Los Angeles, Kapičić did 120 takes during his third call of auditions, stretching the session an additional eight hours beyond its intended four-hour duration, before flying back to Dubrovnik, Croatia to perform Romeo and Juliet. Kapičić, a self-described “comic book geek” who considered Deadpool one of his favorite characters, was especially delighted when he learned he won the role, taking over from Daniel Cudmore, who had played the role in the X-Men films. Kapicic was selected because Miller wanted his version of Colossus, who is Russian in the comics, to have a Russian accent. The 6-foot-4 Kapičić portrayed the 7-and-a-half-foot tall character through a combination of voice work and motion capture, completing filming in mid-December 2015, eight weeks before the film’s February 12, 2016 release date. 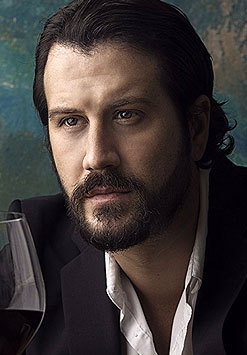