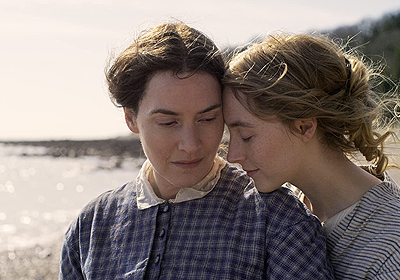 "doesn’t pretend to be a biopic, but rather a meaningful story about love in its purest form"

Describing Ammonite as some sort of biopic would be a gross mistake. As Francis Lee himself said, this is not a story inspired by true events. Rather it is a film inspired by the life of one extraordinary woman. However, unfortunately, although Ammonite is a beautiful and remarkable love story between two strong, but at the same time fragile, women, Mary Anning’s real life achievements remain hidden in the shadows.

The film focuses on the relationship between Mary Anning and Charlotte Murchison. The two historical figures knew each other in real life and were both palaeontologist during a time in history in which there was no place in science for women. However, Francis Lee consciously decided to paint a different picture and, rather than portraying a friendship born out of the same interest for fossils and prehistory, he brings to the screen a love affair during the Victorian era, between two women trying to carve a place in the world for themselves.

As much as one could try and only focus on what was left out with this film, It is quite impossible not to find beauty and perfection in Ammonite.

Francis Lee’s directing style is sharp but at the same time delicate. His camera is capable of often capturing small scenes which carry powerful meaning, especially when focusing on the actors’ faces and capturing their emotions. In his work each tiny detail, like hand-holding or careful and methodic gestures, become important to understand the characters and what they are going through.

The scenography is also a visual representation of the main protagonists’ mood and feelings. Whatever Mary and Charlotte are facing, their surroundings rapidly change between dark and gloomy or sunny and hopeful.

As I said before, Ammonite is a film filled with poignant moments and each and every single one of them is made more powerful by the performances carried out by Winslet and Ronan sharing the spotlight together.

Both actresses portray their characters with true commitment. Winslet’s Anning is a quiet but at the same time independent woman. Someone who prefers to spend time looking for fossils rather than people. It is clear that she is a person who was emotionally scarred before, however her work has become her life. Although she is aware that she will never be praised or recognised for her efforts, she doesn’t lose her passion for her work as well as her awareness and her remarkable talent in finding fossils.

Ronan blossoms on the screen and feeds off Winslet’s talent. Her character, Charlotte Murchison, starts off like a withered flower, a shell of herself. However, the more her relationship with Mary evolves, the more she reveals her nature as a curious, inquisitive woman.

It is thanks to both of them that Ammonite is a film that is worth watching. Their chemistry also flourishes slowly until if finally explodes and propels the story forward bringing to the screen a delicate and passionate depiction of forbidden love in the 19th century.

The only downside of the artistic decision of fictionalising Anning’s romantic life is the fact that, by focusing on this illicit, almost out of its time love story between two real friends, Mary Anning’s life story and her important contribution to palaeontology and geology gets lost in the romantic folds of a powerful relationship.

The unjust faith that Anning had to suffer through her whole life as a scientist living in a moment in history where women didn’t have any say outside of their household, is almost untold if only for little glimpses through the movie.

For all its intent and purposes Ammonite doesn’t pretend to be a biopic, but rather a meaningful story about love in its purest form. However it feels like Mary Anning’s story is still left unsaid and the credit for her scientific work still not recognised.