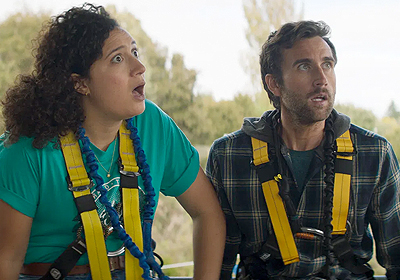 "A charming and funny film, with a splash of honesty about a long-term couple who aren’t ready to be parents"

Baby Done has a comedic side to the story, where Zoe is terrified about becoming a mum for the first time and tries to ignore it for as long as possible. In contrast, Tim is embracing fatherhood for what is about to happen and adapts to change for the sake of the newborn baby, which is upon them.

But as Zoe is terrified, she tries to tick off her bucket list before the baby arrives, and as time progresses and the due date fast approaches, it pushes Zoe further into denial and her relationship with Tim to the absolute limit.

Upon watching this film, I found it funny to watch, some questionable scenes became hilarious, but there were also some very cringe-worthy scenes in the film. However, from watching the trailer to watching the film, I really enjoyed it. It hit on realism with a young couple, who are in a long term relationship, being completely unaware they are about to be with child when Zoe finds she is halfway along with her pregnancy and was blissfully unaware, which brought the question to me as to how she was unaware of how far along she was in being pregnant and not feeling the baby kick or grow or even notice any missing periods for a good few months.

But apart from this, I thought this film was great! One of the best all-time funny and real films I had seen in a while. It is real in the sense of a young couple being completely unprepared for a newborn in their life, still trying to tick off their bucket list, whilst one half is embracing and changing their behaviours and approaches to life for a new life in the world, the other is hoping that by ignoring it, it may go away, which doesn’t work like that, but ends up having to face it when labour hits.

The chemistry on screen between Rose Matafeo and Matthew Lewis allows for a laid back, enjoyable watch to the film, making it funny to the viewer. The film's writing and directing have been done so well, allowing the viewers of the film to feel they are involved in the story, due to the realness and emotions, and the comedy side too.

Baby Done is a great film, it's charming, sweet, and funny, and it means something to every viewer who watches this film. Highly recommend giving this a watch!