Babyteeth(2020) by Cookie N Screen (We Make Movies on Weekends) 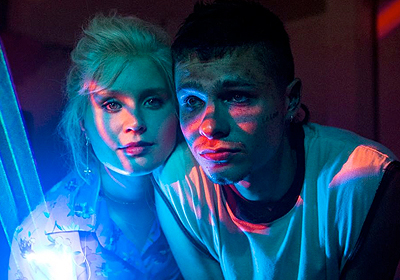 The sickly teenager romance stories have become some weird sub-genre of young adult cinema. The Fault in Our Stars, Five Feet Apart, and Everything, Everything all revolves around some sort of child stricken with a life-threatening illness only to fall in love against all odds. It is supposed to tug at your heart-strings, making you feel all gooey but also sad. Very sad. Because these children are dying and you have to cry over it, dammit!

It all feels a bit manipulative.

However, Shannon Murphy’s Babyteeth has a different, droll bite.

Based on a book by Rita Kalnejais, who also wrote the screenplay, the film revolves around Milla, a young girl with a terminal illness and is about to start another bout of chemo. With her parents, Anita and Henry, different coping mechanisms whilst breathing down her neck, Milla is drawn to loose cannon and petty criminal Moses. Though in the beginning, Moses is only interested in swiping her pills, Milla is insistent on having him in her life – much to the chagrin of her parents.

The tone of the movie and how it is filmed feels like a revelation. Instead of stirring ballads, dramatic crying scenes, and the drag of hospital visits and diagnoses, the film focuses on this erratic family dynamic that is further disrupted by this seemingly troublesome young woman. The strife and the struggle is deftly handled. Each person comes with their own understandable mistakes; Anita is drugged and longing to play piano again whilst psychiatrist Henry feels a slight attraction to his vocal pregnant neighbour. This set-up dismantles the normal “caring and sobbing” parent trope of these movies, giving them tangible and raw moments throughout the film. Add in beautiful cinematography by Andrew Commis, which gives a hazy hue and colourful entry into this family unit, Babyteeth feels powerful and fragile all at once. Much like the characters within the film.

Eliza Scanlan, most famous for her role as the equally ill-fated Beth in Greta Gerwig’s Little Women, is great here. You can understand why Milla, trapped by her circumstance, would want to rebel with the first interesting person who stumbles in her path. Scanlan’s work remembers that Milla is still a hormonal young woman with a crush, ready to burst and shout at her parents. Essie Davies and Ben Mendolsohn also layer Anita and Henry in their distress. Newcomer Toby Wallace is great as Moses, the young man who turns the world upside down. His own story is plagued with tragedy and despite his foibles, Wallace manages to make him an immediate empathic character.

Babyteeth’s does slip into the traps of its subgenre. The manic pixie dying dream girl dances in colourful rays and embraces what is left of her life. But these moments of fortunately very few. This quiet and loving film leads you to a predictable but very visceral end. Alas, though it does not feel manipulative, you will wind up in tears nonetheless.