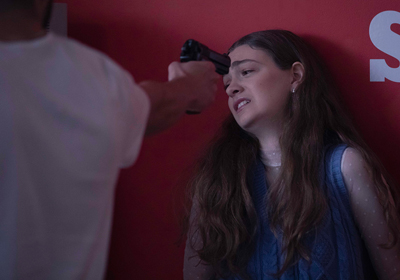 "Stylish and slick, BLONDE. Purple is a riveting watch that keeps you on your toes from start to finish"

Written and Directed by Marcus Flemmings, BLONDE. Purple is the story of Wyatt (Julian Moore-Cook) who, for the majority of the film is an unnamed bank robber, motivated by the dream of owning his dream car. When the bank heist goes wrong, inexperienced and out of his depth, Wyatt takes a hostage in the form of Maddison (Ellie Bindman) in order to negotiate with the cops, to get out of the bank alive.

Stylish and slick, BLONDE. Purple is a riveting watch that keeps you on your toes from start to finish. The film is largely set in the bank manager's office, but has flashbacks to before the heist, mostly involving Wyatt, but they also show how Maddison is unwittingly involved.

The film doesn't work without stellar performances from the two central leads of Moore-Cook and Bindman; these two performers have wonderful chemistry together, and are a joy to watch, they keep you on your toes with compelling backstories as you learn more about them throughout the film.

To say too much about the film would be a disservice, since the best way to see the film is to know little to nothing about it before you watch it. Packed full of smart sequences and references, BLONDE. Purple is an engaging film from start to finish and just goes to show that contained stories set in one location can work and you'll find yourself rooting for Protagonist and Antagonist at the same time.

As I said above, the central performances of Bindman and Moore-Cook are compelling and a joy to watch, these two have terrific careers ahead of them.