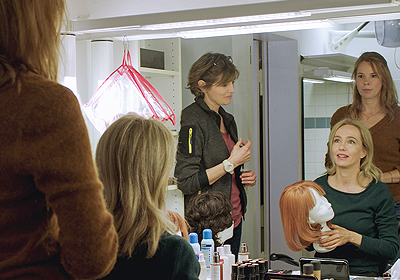 "the sly humour and satire is present none the less. And the final shot wraps up much of Gerwin’s journey beautifully"

Anyone who has worked in T.V. or Film production will acknowledge the sly realism of Nicolas Wackerbath’s Casting.

Set in the build up to the first days shooting on a T.V. film (a re-make of Fassbinder’s The Bitter Tears Of Petra von Kant), we primarily follow director Vera (Judith Engel) and Gerwin (Andreas Lust), a one-time actor who reads parts with other more famous auditionees hoping to land a role. Yet when an opportunity presents itself, Gerwin senses the opportunity to return to the acting game.

Things never go smoothly as cast and crew come and go, and the chaotic and ever-changing nature of such a scenario is smartly realised by Wackerbath, who utilises a handheld camera motif and largely improvised dialogue to create a recognisable sense of madness from the method.

If at times it can feel repetitive, that the overall final result feels slightly unpolished is sort of the point – the lines between reality and fiction are blurred in more ways than one. The creative types are battling with many forces (including themselves) as the start of production creeps closer, brilliantly demonstrated by the slowly appearing sets in the background.

It may not work fully to those without an interest or working knowledge of the industry (in some respects it’s a less mainstream, more stripped down, less jovial, distant cousin of David Mamet’s State and Main) but the sly humour and satire is present none the less. And the final shot wraps up much of Gerwin’s journey beautifully.