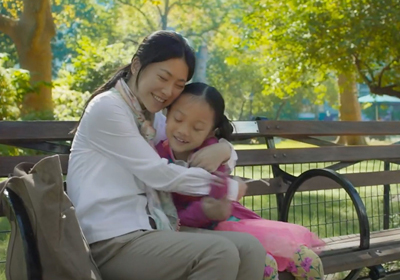 Based on writer/director Ann Hu’s own experiences, Confetti is a slight but important sentimental tale about a child born with dyslexia. Whilst it may not initially seem like an engaging set-up for a feature film it actually starts in Hu’s native Chine where the condition is, remarkably, not officially recognised.

MeiMei (Harmonie He) lives with her mother Lan (Zhu Zhu) and is considered something of an odd child. Unable to write her own name, she is mocked by her peers until an American teacher notices that she is actually very intelligent but may be dyslexic. ‘Is it contagious?’ the school’s headteacher asks when he is informed thus demonstrating a total lack of awareness right through the education system.

In order to give MeiMei a better chance, Lan takes her to New York where they move in with wheelchair bound author Helen (Amy Irving) and try to find MeiMei a school that can assist. Initially hesitant to remain involved in the set-up, Helen’s story arc is fairly obviously telegraphed from reluctant aid to second mother and the change somewhat swift.

None the less, as MeiMei moves from one school to the next, Hu makes her point well – whilst some of the western world may well know about dyslexia it doesn’t necessarily mean they are well equipped to handle all cases in a one size fits all approach to education. MeiMei’s intellect makes her a unique case and this does present a recurring problem in cinema where mental handicaps appear to affect brilliant minds, something that is doubled down on with a closing cue card.

This is not to say that the film doesn’t have an important central message and it’s clearly a deeply personal one to Hu who manages to steer clear of melodrama or grand speeches with her script and channeling it all through well balanced performances across the board.