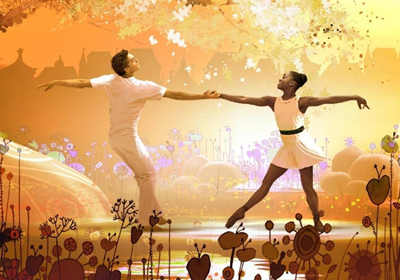 With the live streaming of concerts and shows in cinemas proving to be very popular, it was only a matter of time before a production would be made and filmed specifically for the big screen.

And one such film now arrives in the guise of the slight but charming COPPELIA which comes to UK and Irish screens on 1st April. The character of mad scientist Dr. Coppelius has been seen on film before, but this production has enough originality to stand as its own unique creation.

Merging 2D and 3D animation with live ballet, this dialogue-free tale is set to Maurizio Malagnini ‘s superb original score (performed by the BBC concert orchestra) and tells the tale of Coppelia (Vito Mazzeo) who arrives in a small town with a mystical beauty potion that the townsfolk are, at first, eager to get their hands on. The young Swan (Michaela DePrince) however, can see beneath the surface and fights to rescue everyone from Coppelia’s scheme and secure her true love Franz (Daniel Carmargo).

It's themes of superficial beauty are well-worn and the narrative is easy to map, but from a visual perspective, Coppelia is a treat. The odd blend of styles is sewn together by some beautiful art-direction to create a unique look. The dancing is impossible not to admire – even for those not versed in the way of ballet – whilst there is a smart use of wide shots and minimal editing to capture as much of the dancer’s performances as possible.

To that end, it arguably doesn’t fully escape it’s theatrical roots as you can’t help but wonder how much more impactful and impressive it may be on the stage. There is also the question of whether it will win over any new fans to dance, but at a slender 80 minutes it certainly serves as a good (and more affordable) introduction for younger viewers to ballet whilst providing more than enough to keep those already invested in it entertained.