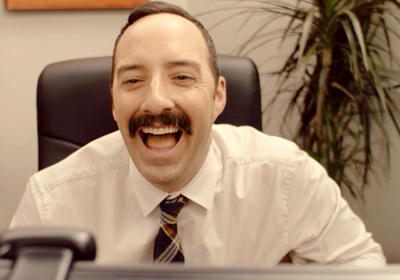 "A fun, light-hearted comedy film, a must see for everyone!"

I loved watching this movie, it is about a full-grown man who ends up stalking an old college classmate, named Elizabeth Banks, who is known as a famous actress. Upon discovering this he tries to prove to his friends and family that he did, in fact, know her during college but along his journey of proving this, he accidently finds himself stalking Elizabeth and rediscovers himself and the true meaning of friendship in his obsessive attempts to prove he knows her.

Before settling down to watch this film, I did check out the trailer and it was funny, and the film did not disappoint.

Dear Elizabeth, is a lovely story, with a good pace to keep up with what is happening and seemed to have been created and directed with a great outlook on life. The real-life Sid has his ups and downs but, in a way, it is relatable to the audience and not in a sad way. He seems to be the irritating brother-in-law to Janet with his try-hard energetic persona which comes across as funny to the audience but irritating to the characters.

Sid's quirky character arc seems to be the norm for his friends and family, especially a scene where Sid is having a few drinks with one of his friends, Wendy, and she tells him how much she loves his optimism around the subject of his campaign in trying to contact Elizabeth and proving everyone wrong.

I love the way his friends and family accept him and his outgoing personality for what it is and supports him in his endeavors, especially his brother Tom, his friends, Dave, James, Wendy and Kate who support him.

All characters within this film have their own unique arcs and it works perfectly with the story of the film, and how much it relates to real life friendships and relationships that are genuine.

The humour is sharp and gets the audience laughing – it certainly did for me. And I am looking forward to watching this again when it is available for download.

I was pleasantly surprised with this film, it was very entertaining, the directing, the writing, the casting, and the editing/picture throughout the film was great. I will be recommending this to friends and family to watch.