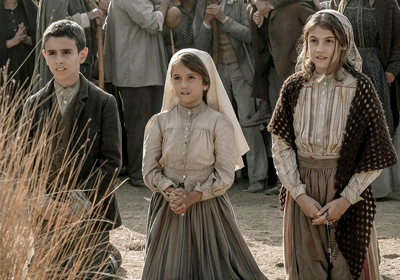 Whomever has been exposed to Catholicism one way or another knows about the story of the three shepherd children from Fátima, who claimed to have received multiple apparitions of the Virgin Mary, who bestows to them three secrets regarding the future of humanity.

Directed by Marco Pontecorvo, Fatima is the second movie based on the events which occurred in Fátima, Portugal, in the midst of World War I.

The film focuses on the many Marian Apparitions, which all occurred in 1917, witnessed by Lúcia, Francisco and Jacinta, culminating in the famous Miracle of the Sun witnessed by millions of people gathered to pray while the three young children received their messages from the Lady of the Rosary.

The choral and religious influence in the movie is quite evident, especially because the film wants to celebrate the canonisation of Lúcia, Francisco and Jacinta. However, the main focus of the story is to put on display the eternal debate between faith and reason.

On one side, the young protagonists have to constantly prove they are telling the truth not only to their parents and the rest of the village but also to the Catholic church. They are trapped in a tug of war between their blind faith and the authorities fighting to get them under control.

Since they represent Faith’s side, Lùcia, Francisco and Jacinta are portrayed under the purest of lights and their perseverance is constantly rewarded by the Lady of the Rosary granting them small miracles to show everyone they are telling the truth.

On the other side, the local authorities are portrayed as non-believers; they first try to rationalise what is happening with scientific explanation. Then, as more believers gather each month, they start questioning why God would send one of his messengers when there is a global war killing men and ripping them prematurely from their families.

Along with them, even the Catholic church wants to prove the messengers wrong. They refuse to believe that three illiterate kids can be chosen as vessels for the word of God instead of themselves.

Nonetheless, by the end of the movie, they have to accept that the three children are actually telling the truth and what becomes abundantly clear is what motivates their skepticism. In this war between faith and reason, both the local authorities and the Church are paralysed by the fear of losing control over their people in a time in history where unity and control must be kept at all costs.

Pontecorvo’s directing style helps the movie maintain a slightly fast pace. The structure repeats itself three times according to each apparition. The historical context of the World War I raging on is also always present to remind the audience the circumstances in which the events occur. Almost as if to try and justify how something so surreal could actually take roots and be considered realistic.

The cast ensemble as a whole brought to the screen a realistic performance. Worth mentioning are Lúcia Moniz and Goran Visnjic, who hold the film on their shoulders with their strong performances. Alongside them, the three young actors portraying the messengers also showcased raw talent and commitment to the story by using their real naïvety and innocence to bring back to life Lúcia, Francisco and Jacinta. Their bond is extremely strong and highlights the close relationship between the three cousins.

Although, as a whole, the film doesn’t shine as a masterpiece, Fatima is still a well crafted movie that successfully brings to the screen the eternal fight between faith and reason without pretending to give the audience an answer on who is the real winner.