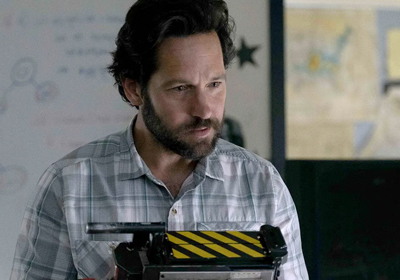 This is possibly the hardest yet easiest review I have had to do to date, but for the best reason possible.

As a late 80s baby I admit I missed both original Ghostbusters films in the Cinema, however they are both treasured films which hold a special place in mine and most of the Western worlds hearts. For years we heard rumours of a third Ghostbusters film which seems to never get passed the development stages and was usually blamed on Bill Murray being awkward and rejecting every script. Then came 2016’s all female reboot, and whilst it is an okay movie in general it was not fit to call itself a Ghostbuster movie.

So you may ask, why have I gone to the trouble of telling you all the above… Well because all of my expectations were immediately blown away, but I digress… As this is a non spoiler review I have to be strict with what I can say. Firstly the opening feels very different in tone to either two previous films with a lot of cat and mouse being played, but then it hits just the right stride and you start to realise the quality of what you’re in for.

So we all knew there were going to be cameos, the final trailer shows this, but the new cast are equally as impressive. The whole movie wouldn’t have half the heart and charm were it not for Mckenna Grace’s Phoebe at such a young age, she so brilliantly carries herself and brings a lot of believability to her role as a gifted yet introverted teen who doesn’t really know her own family history. Supporting roles are equally well cast, Finn Wolfhard is great as Trevor and never feels too much like his previous roles in Stranger Things or IT. Carrie Coon is brilliant as their mother, Callie who is the estranged daughter of Egon Spengler, she also has brilliant chemistry with Paul Rudd which makes all of their scenes an utter joy to watch. But… Let’s be honest we all want to see our old favourites, knowing this Bill Murray, Dan Akroyd, Ernie Hudson and Annie Potts all reprise their roles from the original two films to great effect and whilst steeped in nostalgia, it never feel like they take away from the story and only enhances it.

The elephant in the room in this case is the one main missing character.. Egon Spengler himself. It’s safe to say Harold Ramis is a hugely missed part of the movie, with this said his spirit is very much felt throughout and lends the story such of punch of emotion.

It’s also worth a mention that the music and sound department feels like a character all their own. Much of the original score is repurposed here to great use, to hammer home the feel and sentiment. Aside from perhaps a few mis steps with other songs on the soundtrack it’s almost perfect, I admit this is my own taste and well… it can’t be the 80s forever.

Lastly for fans of the extended lore and other media these characters have appeared in for other 30 years you will not be disappointed. Whilst the premise is about ghosts and ghouls, at its heart it’s really about family and never knowing how much someone actually loves you until it’s too late.

The closing segment legit had me crying with both happiness and some other unnamed emotions. I don’t want to cheapen it by even hinting at what happens. What I will say however is… when you hear that familiar theme play just before the credits start… my god, it felt like I was a kid again.

Aside from the small musical issues my only other issue with the film is that people will draw comparison with the originals, some of the characters archetypes will be extremely family and there are already comparisons to this being a Ghostbusters version of The Force Awakens, are these warranted? ... maybe but they do not stop it from being enjoyable.

I give Ghostbusters: Afterlife 4.5 out 5… In reality it’s more like a 4.9 but grading wont allow that, it’s the sequel we deserve, the sequel we have wanted all these years and maybe… just the start of something.

Oh.. And who you gonna call?