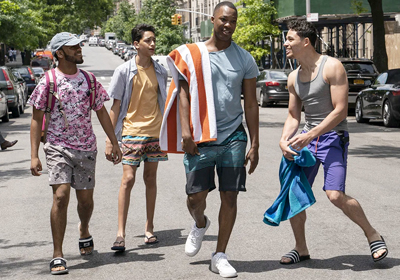 "Chu is inventive, blending fantasy elements and realism to emulate the stories of these bright-eyed dreamers"

The English weather is unpredictable, bouncing between sweaty and hot to freezing and drizzly, however, in cinemas this week, the all-singing and all-dancing In the Heights is the summer we Brits have always wanted and it is certain to bring a bit of blazing sunshine into your life.

Based on the musical of the same name by Lin-Manuel Miranda and Quiara Alegria Hudes, In The Heights revolves around the streets and residents of the titular Washington Heights, New York City. It follows a young bodega owner named Usnavi and his dreams of returning to the Dominican Republic to open his late father’s bar on the beach.

Usnavi is not the only one dreaming; his love interest Vanessa wishes to move Downtown to work in fashion and his best friend Benny wants to earn enough money to own a business. All the while Daniela is coping with her salon having to move and Nina returns from her first year at Stanford, finding herself struggling with her identity.

All these stories and more weave together in this vibrant celebration of Latin culture, all under the watchful eye of the matriarch Abuela Claudia.

In the hands of director Jon M. Chu, who gifted us the extravagant yet endearing Crazy Rich Asians, In the Heights dazzles us. Staging the musical in the sweltering heat of New York in summer, Chu brings out the sizzling sweat and blazing beauty of the story, so vividly that you can feel it. Chu is inventive, blending fantasy elements and realism to emulate the stories of these bright-eyed dreamers.

This is best shown in 96,000 where most, if not all, of our characters imagine what their life would be like if they won the lottery. Set in a swimming pool, as everyone cools down in the middle of the day, this brilliant moment feels like a homage to classic busby Berkley musicals.

Of course, Lin-Manuel Miranda’s music is iconic, having the same rap-singing vibe that made the stage production a Tony award-winning musical and also made his best-known work – Hamilton – such a smash hit. You’ll be humming catchy songs such as Benny’s Dispatch, No Me Diga, and The Club long after the credits roll.

Anthony Ramos is our leading man Usnavi and he is astonishing. He captures Usnavi perfectly; young, scrappy, and hungry whose dreams may be closer than he thinks. Ramos has great chemistry with the camera and is utterly watchable. Usnavi works hard but also is awkward around his love interest Vanessa. The pair struggle to balance their feelings for one another whilst also striving to escape to brighter horizons. Melissa Barrera is fantastic opposite Ramos, but she also establishes Vanessa’s own problems.

Leslie Grace, Corey Hawkins and Jimmy Smits all make for great support as well. Most of the cast are on point, however, Olga Merediz’s portrayal of the kindly, caring Abuela Claudia is breath-taking. In the colourful and inventive sequence for Paciencia y Fe, Merediz is astonishing, capturing the struggles of a first-generation immigrant as she moved to New York as a child. Though Abuela Claudia finds a home and family by taking in the orphans and strays of the heights, she admits she struggled. How the song is designed visually on the screen is unique and stunning and certainly one of the most pivotal scenes of the whole movie that will stay with you.

There are a few problems. The film struggles to transition between songs and dialogue. Instead of feeling seamless, as though the characters weren’t aware that they were bursting into song, it cuts as though we were watching a procession of performances. It’s clunky.

Plus, the editing can be erratic. Sequences such as Carnaval del Barrio or the finale scenes don’t leave breathing room for the audience. It’s a struggle to focus on characters and in some places, you aren’t sure who is singing when and what.

There has also been a lot of talk about it’s lack of Afro-Latino and LGBTQ representation.

You can forgive In the Heights for some of its faults. There is so much heart weaved into the colours and fabrics and dances and songs that it feels like an experience. That the sweat and movements are coursing through your heart, filling you with the utmost joy.

2021 feels like a battle of musicals and In the Heights definitely has the highest position at the moment.