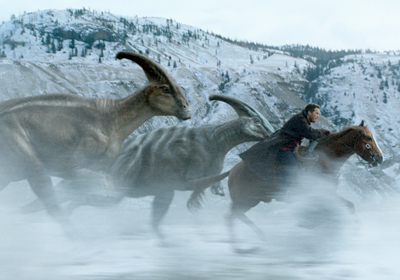 "The Dinosaurs are very well realised, using a blend of puppetry and CGI and the music, not just the incredible theme by John Williams is fantastic"

So I'll start off by saying that I'm a fan of this franchise, I've enjoyed most of the film's to some degree and now we have come to the latest instalment in the Jurassic Park/Jurassic World franchise, and I can safely say that I enjoyed this more than the previous entry.

We pick up where we left off, with Dinosaurs and Humans coexisting on Earth, but whilst some are choosing to make the best of it, there are some that are looking to exploit it with black market trades and underground fight rings. The World is very much lived in and that's one of the best aspects to the film.

We are introduced to the new threat, and since it hasn't been in any of the trailers so far, I won't spoil it here, but it was an interesting way to go.

Jurassic World: Dominion is a film made up of two main plots; the first plot sees Chris Pratt’s Owen Grady and Bryce Dallas Howard’s Claire Dearing living off the grid protecting Isabella Sermon’s Maisie Lockwood following the events of Jurassic World: Fallen Kingdom, when she is taken, that kick starts their mission to get her back unharmed, and the other main plot sees the return of the legacy cast of Laura Dern as Ellie Sattler and Sam Neill as Alan Grant, who are investigating the Environmental impact going on and the bioengineering firm Biosyn, which leads them to reconnect with Jeff Goldblum’s Ian Malcolm, and the plots merge in a satisfying way.

The scenes that stood out to me were the ones in the caves that gave a very atmospheric and Indian Jones vibe to proceedings, which I was here for and very much appreciated. There was something that I didn't expect, I won't spoil it, but it was something that I'm not mad at. The Dinosaurs are very well realised, using a blend of puppetry and CGI and the music, not just the incredible theme by John Williams is fantastic, and accompanies proceedings really well.

There are plenty of call backs to different points in the Jurassic Park/Jurassic World franchise, which I found was a nice touch. All in all Colin Trevorrow and his creative team have made a thought provoking entry into the Jurassic Park/Jurassic World franchise, which is rumoured to be the last, and after six films if this is the end, it caps off really well, but it does leave it open if they want to continue and I'd be happy to see it.