Knives Out(2019) by Federica Roberti 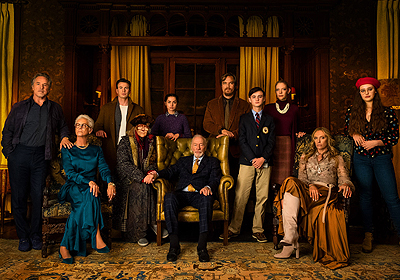 "there is a crescendo of events that will lead to the most perfect ending, tying up everything together to give the audience that Ah-a moment"

After watching the trailer for this movie, my curiosity immediately peaked, a murder mystery with a stellar casts? Count me in and colour me intrigued. Luckily, not only did Knives Out meet all my expectations, but it also exceeded them by adding the element of comedy to an already brilliant film.

Like any classic whodunnit, the plot of Knives Out is set around the sudden and mysterious death of famous mystery writer Alan Thrombey. Immediately ruled out as suicide, the investigation of private consultant Benoit Blanc brings to the surface family drama and irrefutable proof that the patriarch of this rich and competitive family might have been killed after all.

Written and Directed by Rian Johnson, Knives Out is a clever and extremely funny crime story that mirrors the design of any classic Agatha Christie book adding a comedy twist that makes the film that more enjoyable.

The set design looks like something that came out of a book cover. A huge mansion filled with trinkets, memorabilia and dark wall paper and heavy tapestry is at the centre of the story. Mist and fog add that level of mystery always present in the crime genre and the soundtrack adds the sense of uneasiness and danger to complete the picture.

Although the film is set in contemporary times, the set looks like it came from the 1900 and it gives to the film a timeless vibe making it even more intriguing. The cinematography is spectacular in its own accord. The camera sharply cuts on the characters faces to highlight their reactions and emotions throughout the scenes. The lighting is cleverly employed to add suspense and leaves the audience on the edge on the most pivotal plot twists.

The timeline is fragmented and uses the protagonists recollections and testimony to paint a picture that only completes at the end, just like in a classic crime novel. There are several twists and many references to the Queen of Crime novels - Agatha Christie, starting with the private investigator’s name, a funny homage to the more famous Hercule Poirot, minus the moustache and clever come backs.

With such a rich script and great cinematography, the cherry on top of this well constructed and beautiful cake is embodied by the cast ensemble. From Jamie Lee Curtis to Toni Colette, Chris Evans and Christopher Plummer, there is not one actor that falls short. Their comedy timing is perfect and it mixes effortlessly with the mystery and crime factor of the plot.

When it comes to murder mystery and crime stories, the element of surprise is essential. In Knives Out there is a crescendo of events that will lead to the most perfect ending, tying up everything together to give the audience that Ah-a moment at the very end.

What makes the film special, is how well comedy, dark humour and satire are so well balanced with the crime. Ana de Armas, Chris Evans, Michael Shannon, Toni Colette and an overly serious (for comedy purposes) Daniel Craig light up the screen with their performances.

Knives Out quickly climbed on my top 5 movies’ list for the London Film Festival’s current edition. It is a project that in mixing up humour and crime, successfully entertains the audience while also openly and unabashedly criticising current social and economical affairs by using irony and sarcasm.