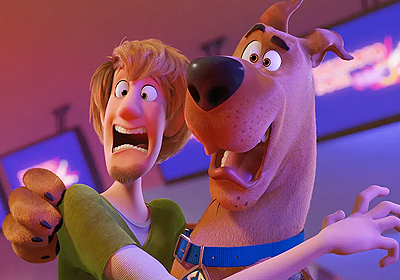 "has its heart in the right place, enough to bring in new fans of the beloved talking canine, whilst giving legacy fans enough to keep them engaged"

Scooby Doo has always had a special place in my heart, the beloved Hanna-Barbera cartoon was first conceived in 1969, created by Joe Ruby and Ken Spears. The series follows Fred, Daphne, Velma, Shaggy and of course the titular Great Dane Scooby Doo on their adventures in their trusty van the Mystery Machine as they take down wrongdoers who use an urban legend to get what they want.

The phrase ‘I would’ve got away with it, if it weren’t for those meddling kids’ is synonymous with the series and over the years there have been countless entries into Scooby Doo lore; some good and some bad, and so when I heard there was going to be an all CGI, modern version of Scooby and the gang and that it would show the origins, I was excited, like most Scooby fans.

So first off, Scoob! is gorgeous, the world created is stunning and well realised, seeing these characters in 3D is awesome, seeing them like this really brings a new dimension to their classic looks, the characters still look the same, but being computer generated it brings them to life like never before.

The film opens with a chance encounter between a down on his luck Shaggy (Iain Armitage), who is a loner and Scooby (Frank Welker) who is running from the law, they become fast friends and during Halloween, they encounter Fred (Pierce Gagnon), Daphne (Mckenna Grace) and Velma (Ariana Greenblatt) following the unmasking of costumed thief Mr. Rigby, they become inspired to solve mysteries together as Mystery Inc.

Following the recreation of the classic Scooby Doo opening, Scoob! fast forwards ten years to find Fred, Daphne, Velma and Shaggy, now voiced by Zac Efron, Amanda Seyfried, Gina Rodriguez and Will Forte respectively seeking investment into Mystery Inc. from Simon Cowell. Showing his distain for Shaggy and Scooby, Simon refuses to do business with them; claiming friendship is useless and feeling unwanted, Shaggy and Scooby leave and go to a bowling alley where they are attacked by Rottens; vicious little robots that are controlled by master criminal Dick Dastardly (Jason Isaacs).

It is revealed that Dastardly wants to capture Scooby as part of a plan involving the three skulls of Cerberus. Teaming up with the Blue Falcon (Mark Wahlberg), Dee Dee (Kiersey Clemons) and Dynomutt (Ken Jeong), Shaggy and Scooby learn more about their friendship and their ancestry.

Scoob! is great fun, it is packed full of references and nods to the Hanna-Barbera universe, seeing the inclusion of such characters like Captain Caveman (Tracy Morgan) and having a clear message of friendship no matter what, it really brings Scooby Doo into the modern era with the excellent blend of wacky humour and CGI.

The voice cast are flawless, however I do miss Matthew Lillard as Shaggy who has voiced the character since 2009 following Casey Kasem’s retirement from the role, however it teases a larger universe that is echoed greater during the end credits that tease at a larger universe for the classic Hanna-Barbera characters, which I’d be well up for seeing.

All in all, Scoob! has its heart in the right place, enough to bring in new fans of the beloved talking canine, whilst giving legacy fans enough to keep them engaged.