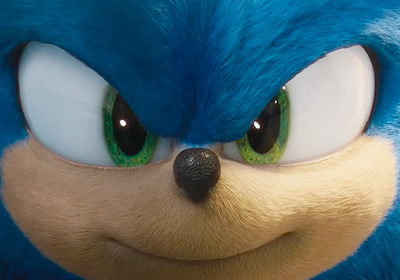 So the long awaited film adaptation of fan favourite speedster Sonic The Hedgehog has finally arrived on Digital, following a successful Cinema release in February and some controversy over what he was going to look like, it is safe to say that with the redesign, Sonic looks gorgeous and brings him firmly into the modern day for new audiences, whilst also making the older audiences reminisce about what we grew up with.

Whilst I will not use this review to further pile on about the well documented redesign, I welcome it and the film doesn't work without a character design of Sonic that we all love, placing him in an outlandish situation whilst grounding him at the same time.

So the film opens on what I can only assume is Planet Mobius, with Sonic zipping around the island, it looks very much like the Green Hill Zone from the classic games, here we are introduced to his parental figure and mentor; Longclaw (Donna Jay Fulks), a giant owl, whom is a creation for the film, and whilst some audiences will call fowl on this, she's a welcomed addition, and let's not forget that in the cartoons especially, there were multiple continuities, so creating a new character for the film is great as far as I'm concerned; put it this way, his parental figure couldn't be someone like Big the Cat because it is already established in canon where he met Sonic, so it wouldn't work.

When Sonic and Longclaw are discovered by a tribe of Echidna (Knuckles' race), Longclaw opens a portal with the magic rings to Earth, urging Sonic to leave in order to protect himself and his power, whilst the Echidna close in on them.

Fast forward ten years, and Sonic (Ben Schwartz) is living a solitary life on Earth, interacting with the locals of Green Hills, Montana in secret. When Sonic gets upset and accidently uses his power to generate an EMP, knocking out the power in the town, he alerts the government and Dr. Robotnik (Jim Carrey) to his location, with the help of local sheriff Tom (James Marsden), the pair embark on a road trip to evade capture.

Right from the start, the world of Sonic The Hedgehog is beautifully realised and fits with the design of the much loved blue hedgehog, it's a shame we don't spend more time on his intergalactic homeworld, but with how much fun the film is and the interplay between Marsden and Schwartz, it is easy to become engulfed in the action on Earth and the camraderie between Sonic and Tom is sweet and believable.

Jim Carrey is wonderful as the evil genius Dr. Robotnik, his Robotnik is the smartest person in the room and boy does he know it, belittling and condescending everyone he comes into contact with, it's hilarious to watch and Carrey makes a triumphant return to film with the larger than life Dr. Eggman. There are some nods to his backstory, but it is unclear if this is a reference to his alter ego Kintobor in the comics continuity.

Packed full of nods and Easter Eggs that fans will love, Sonic The Hedgehog is a step in the right direction for films based on beloved video games, the film is very entertaining and following the controversy over the design, the future for the franchise is bright, and no spoilers, but wait for the end credits scenes, you'll thank me later.