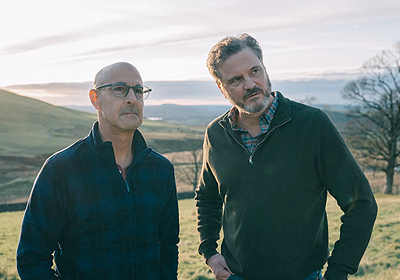 "a delicate mature love story with a melancholy undertone"

Written and Directed by Harry Macqueen, Supernova is a delicate mature love story with a melancholy undertone about two men trying to create as many memories as they can before it is too late.

The main protagonists are Tusker and Sam. One is an accomplished novelist and the other a great composer and pianist. During a break from their work, they decide to travel via caravan to the north of England to visit Sam’s sister.

Their escape however is bittersweet; Tusker has been diagnosed with early onset dementia and the couple is trying to make the most of it, before the illness completely takes over their lives together.

Supernova is Macqueen second movie as writer and director and once again he has confirming his talent in portraying ordinary but strong love.

This time, in Supernova, the kind of love represented is that familiar relationship between lovers who know each other like the palm of their own hands. Tusker and Sam have been together for years and with their trip across England, they are attempting to make new memories knowing full well that, because of Tusker’s illness, this could be the last chance at normalcy before their lives are consumed by his condition.

Colin Firth and Stanley Tucci are perfect together while playing the roles of two partners who adore and respect each other. Their chemistry is strong but also quite delicate. The little nuances between Sam and Tusker are typical of a couple who has been together for many years. Both of them know the other really well and, like any ordinary couple, find solace in each other’s habits, no matter how frustrating they can be.

Tucci and Firth play their characters with honesty. Tusker and Sam’s love is not like an explosion. There is the familiarity that comes with being together for years that is quite tender. However, throughout the film till the end, emotions starts running raw and desperate.

Watching them share the screen as lovers is a calming yet heartbreaking experience. Because of their commitment to show Sam and Tusker’s real love, it is really easy for the audience to get emotionally attached to the story.

In Macqueen’s true style, another protagonist of the story is the scenery; much like in Hinterland, Supernova is shot in the beautiful country side in the north of England. The autumnal colours, the wild hills and isolated lakes bring to the story a sense of peace as well as a melancholy. The settings make even more poignant the finality of the circumstance that lead to Sam and Tusker’s countryside trip.

They are both, in their own ways, trying to create more memories before Tusker loses himself to dementia. However, while for Tusker this is some sort of final act, a way to enjoy the company of his friends and family for the last time, Sam is instead trying to at first avoid reality and then in the end trying to grasp onto as many precious moment with Tusker, knowing full well that their future will be difficult.

While portraying the story of two men desperately trying to hold on tight to their memories and life together, Supernova is a romantic drama about learning to let go and trusting in the power of love even in the worst of times.