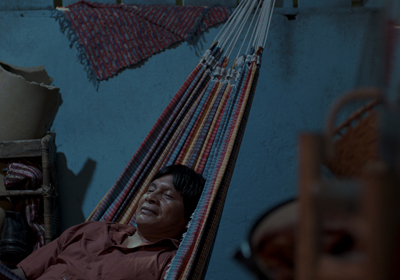 "Often sad, occasionally disturbing and frequently thought-provoking, The Fever is an important, timely and memorable examination"

The city of Manaus sits in the north of Brazil, a unique urban landscape in the heart of the Amazon rainforest. It has the trappings of a unique yet somewhat lonely place which thus makes it the perfect setting for Maya Da-Rin’s heartfelt exploration of identity and isolation.

It opens with a shot of Justino (Regis Myrupu) – almost asleep whilst wearing a hard hat and hi-vis jacket – whilst the sound of the rainforest underpins the visuals as part of an impressive sound design. Justino we learn is a member of an indigenous people and works in the cargo port of Manaus whilst living with his daughter in a shack on the city’s outskirts. A repetitive shot of a bus bringing Justino home is a striking visual reminder of the contrasting urban and rural world that he is caught between. Regularly dozing whilst at work he struggles with an unspecified fever that comes and goes as the television news reports sightings of a strange creature patrolling the streets.

Although conceived pre-pandemic, Da-Rin’s film could not be prevalent, as Myrupu’s note perfect and sensitive performance portrays a character trying to make his way in the modern world yet indifferent to its rules and regulations. A key scene with his employee’s Human Resources department paints the stark contrast of life work and recorded work (he only qualifies for a small redundancy due to his lack of documentation), whilst the arrival of his brother has him harking back to his life in his native village and his daughter looks to find her own path in medical school.

Although the fever of the title and prowling monster create potential trappings of a horror film, Da-Rin skillfully never falls into them and keeps the focus on theme and character. She portrays the city as a character in itself whilst the surrounding jungle serves as a both a reminder of what has been built upon and a place to which Justino could escape to his roots.

Often sad, occasionally disturbing and frequently thought-provoking, The Fever is an important, timely and memorable examination of who we are, where we come from and where we belong.