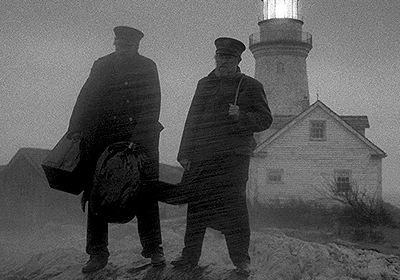 Robert Eggers debut feature The Witch was a brooding mastery of historical shocks. Launching Anna Taylor-Joy’s career and making us fearful of the woods and, well, goats, Eggers cemented himself as a horror fiend, directing peculiar and menacing masterpieces – and he only has two features.

Now he continues with black and white escapade The Lighthouse.

The film revolves around a titular island away from most civilisation. Two new keepers, otherwise known as Wickies, are sent every month to take care of the facility. The young Ephraim Winslow and Thomas Wicks are to take board in an isolated house on the island. However, tensions immediately arise as the inexperienced Winslow is set to do all the grim and excessive jobs whilst Thomas tends to the light alone. With the old man telling tall tales, the copious amount of drinking, and a belief that there is something truly terrible within the light.

Eggers directs a kaleidoscope of madness which is as captivating as it is maddening. Devoid of colour in a crisp stunning way whilst also set at a 1.19:1 ratio, Eggers stamps a unique look onto this film. There are sequences so clear and emotional that you can smell the shit filled bedpans or the alcohol drench men. Linked with an immersive sound-design that echoes like the epitomes warning singing, and a score breathlessly haunting by Mark Korven, the viewing experience of The Lighthouse is like drifting into a clueless insanity.

Starring Willem Dafoe and Robert Pattinson, it is within these performances which the film excels. Dafoe, lit by an insane light, is barely recognisable. He wails in a surly fashion through ferocious monologues about curses and sea monsters. As the instantly insufferable Thomas, Dafoe is great – a drunken fool who may be twisting the days to his own will. Pattinson, though not as memorable as Dafoe and slightly more mumbling in his uneasy American (?) accent. However, he grows towards the end of the film, mastering an infuriating man where the booze, the titular landscape and Thomas.

The Lighthouse is not an easy watch, however, and saturates the experience with long-drawn out sequences that tests the patience. Though one may suspect that this frustrating element was purposeful. As our conduit into the mayhem is Winslow (even though, over time, we begin to suffer at this connection,) his unravelling due to the relentless days and nights. The strain is palpable as ambiguity plays on the mind, unsure whether Thomas is twisting Winslow or Winslow’s mind is truly breaking.

There’s also the proposition that The Lighthouse is not even a real place. Secrets pilfer into the drunken stupor nights and one may question that it is a limbo of sorts, set to extract Winslow’s soul for torture. Suffering the images of madness - seagulls, mermaids, murder, and flatulence – Winslow gives into his wildest nature as we query which of these images are real or imagined. The crashing waves upon the rocks bring up this hellish theme – could this all be Winslow’s hellish lament?

The Lighthouse is a puzzling bewilderment that draws you in – like a monstrous entity caught in the light. Or, perhaps, a siren wishing to see you dashed on the rocks. Either way, you’ll come out of the viewing experience warped and delirious.